Legends and historical events have immortalized castles as significant elements of Albania’s cultural heritage. Numerous castles in Albania are magnets for international tourists. Hence, we decided to look at the country’s ten most popular castles.

Skenderbeu’s Castle is located at Rodoni Cape, 58 km away from Tirana, a strip of land in the Adriatic Sea that divides Lalzit Bay from Rodoni Bay. Prince Karl Topia aimed at building a shipyard in the Cape area, while the Albanian National Hero Scanderbeg built a castle in order to have access to the Adriatic Sea. The construction of the castle began after the first siege of Kruja in 1450, and it was completed around 1452. The surrounding wall was 400 meters long. By 1500 the castle was seized by the Venetian troops. A considerable part of the walls sunk into the seawater.
Now, it’s possible to visit the external walls of the right side of the Castle. A major problem in the area is caused by garbage, junk, and tons of plastic that are washed ashore.

Cape of Rodon: A castle, a clean coastline, and an ancient legend

What to do at Rodoni Cape?

Are you looking for a location for your wedding photo session?
The cape is its picturesque landscape makes an amazing wedding photo location. There are always couples shooting their photo sessions. Even though remote, it is a great location for an intimate wedding ceremony.
A spiritual place
Visit Saint Ndou church, located on the beach, is an important monument visited by international tourists. It is also a pilgrimage site, where believers gather every June 13.
Outdoor adventure
The road in the hilly countryside is great for biking and off-road tours. Meanwhile, the small beach by the church is perfect for camping.
Best time to go: April-October
How to get there: follow Tirana-Maminas-Lalzit Bay- Drac-Shetaj itinerary. 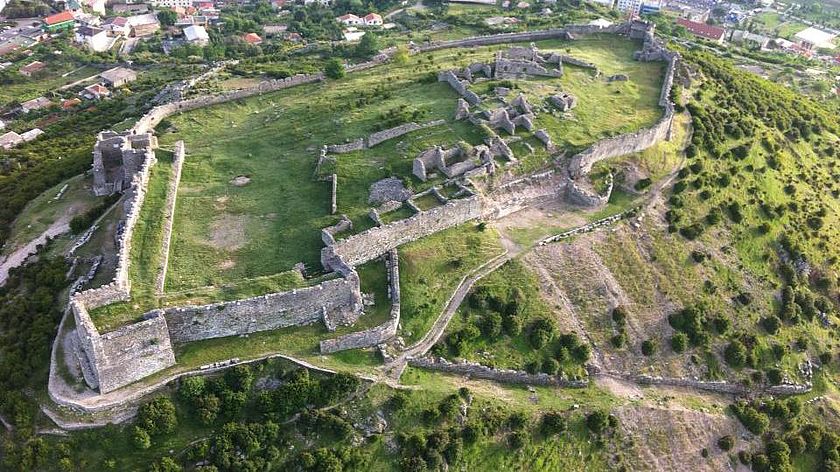 In ancient times, Lissus (nowadays Lezha) was referred to as the city in the sky. The castle is located at the top of a hill, 186 meters above sea level, and watches over the Adriatic coast, some 53 km away from Tirana. The view from the castle, especially at twilight, is the reward for every visitor that decides to hike up to the castle. It was built over the ancient castle of Akrolis and went through reconstruction work by the Venetians in 1440 and later by the Ottoman invaders. Therefore, it is possible to find architectural traces from the Illyrian, Roman, Byzantine, and Ottoman periods. The most interesting places to visit in the castle are the ruins of the Ottoman building, the tower with a Roman arch, and the Illyrian tower on the southern side. The castle has a strategic position over Drin valley and Lezha plain.

What to do in Lezha

Visit the Memorial Museum of Skanderbeg and Gjergj Fishta house.
Explore the vineyards of Kallmet and try local delicacies at Mrizi i Zanave in the Fishta area.
Don’t miss Rana e Hedhun, Kune-Vain Lagoon, Tale, and Shengjin beaches.
Best time to go: April-October
How to go: Take a van or the bus from Tirana to Lezha. By car follow Tirana-Kamza- FusheKruja-Thumana-Lezha itinerary. 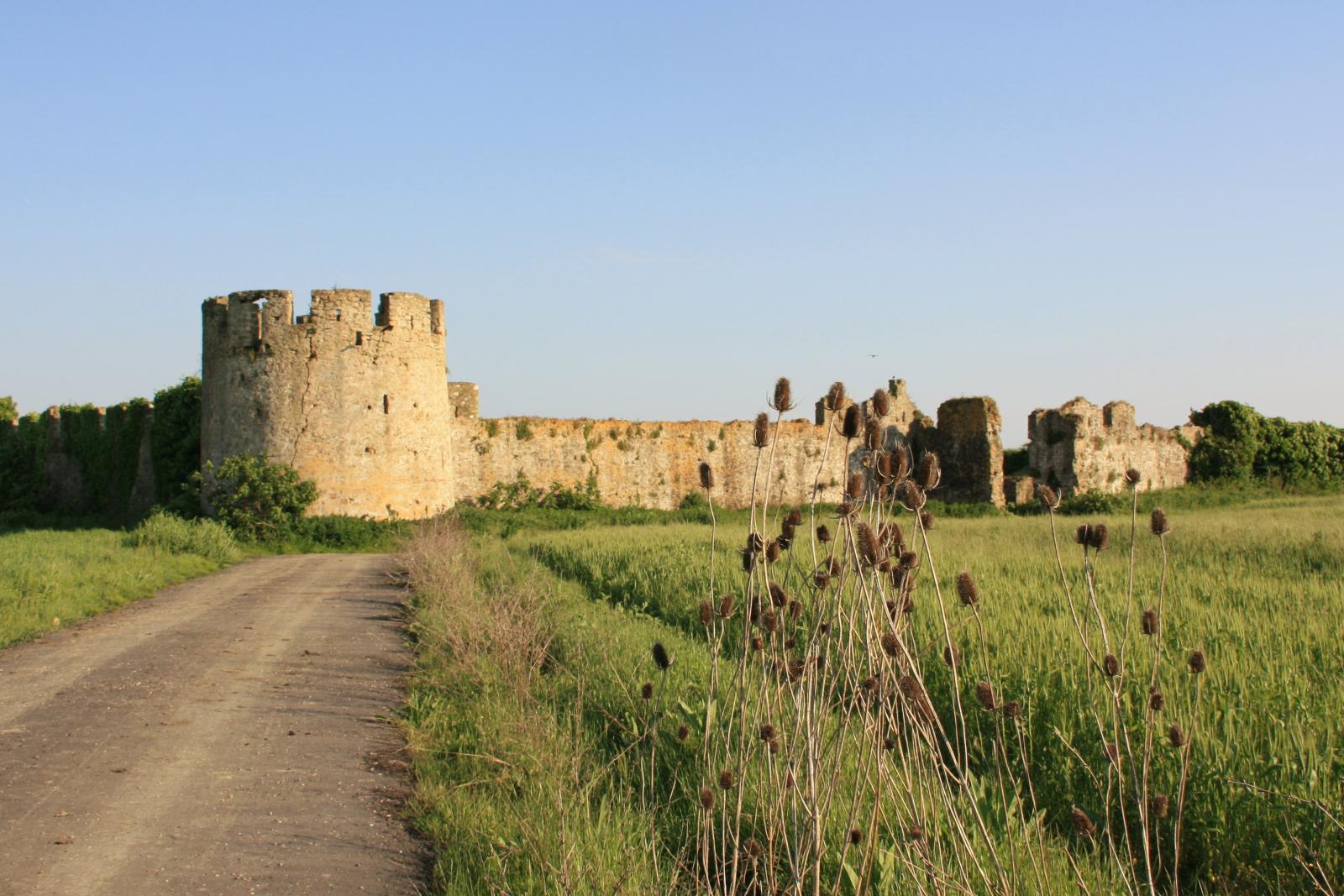 Bashtova Castle is an overlooked destination located in the Kavaja area, about 76km away from Tirana. The castle is located in a strategic position. It was built on a Greenfield site and has a rectangular plan. It is believed that it was a two-story structure and that the first floor is underground. This monument of culture is on the tentative list for being listed as a UNESCO World Heritage Site.

Explore Bashtova Castle, One of the Rarest Fortresses in the Balkans

What to do in Bashtova

Explore the picturesque landscape and visit local beaches and Divjaka Karavasta National Park.
Best time to visit: Choose the warm months of the year as the road and field surrounding the castle get flooded during the rainy season.
How to get there: Follow the Tirana-Kavaja-Gose-Vila itinerary. 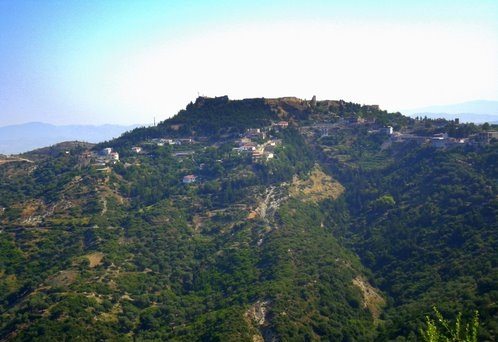 There are several castles in Albania like Rozafa in Shkodra, Porto Palermo in Himara, and the Castle of Gjirokastra that are closely related to real or fictional women. Yet, the history of Kanina Castle in Vlora is related to the history of powerful women that ruled the castle.
According to historians, the Amantini tribe was settled in the Kanina area during the VI century BC. The castle was seized by the Romans in 234 BC. Afterward, it was ruled by the Byzantines, the House of Balsha, and the house of Gjergj Arianiti. Later the Ottomans and the Venetians fought over the castle.

Kanina and its sad ladies

Eqerem Bej Vlora in his book ‘Kanina Castle and other scriptures’ quotes a Norman anonymous chronicle named “Breve Cronaca normanna”. According to it, Crusader Bohemond of Taranto surrounded Kanina Castle during the Norman Campaign of 1081. Given that they couldn’t take seize the castle by force, they changed tactics. The Normans convinced the wife of the Byzantine commander to kill her husband in exchange for a good reward. The women accepted and the Normans captured the castle. However, the vile tactic was disapproved by the father of Bohemond, Robert Guiscard, and the traitor’s wife was imprisoned at Zvernec Monastery.

The second story is about Maria Frengu, a noblewoman from Kanina, or as Shakespeare would describe: Look like the innocent flower, but be the serpent under it.”
Long story short, she would cause the death of her two husbands. The first was Kostandin Habaroni, a Byzantine statesman in Arbri Principate, and the second was, Admiral Filippo Kinardi, a vicegerent of the King of Naples. The reasons why she caused the death of her husband were related to her brother-in-law, the Depot of Epirus Mihali II, and his expansion goals.

The third story is about Komnena Muzaka, who became the ruler of Kanina following the death of her husband, Prince Balsha II. After her death, at the time when the area was threatened by the Ottoman Invasion, her daughter Princess Rugina Balsha was the ruler of Kanina. After she failed to put her properties under the protection of the Republic of Venice, Rugina fled into exile.
The castle is mentioned again, when Donika Arianiti, the daughter of Gjergj Arianiti married Gjergj Kastrioti Skenderbeu. The legends say that the wedding ceremony took place in Kanina Castle.

What to do: Kanina is five km away from Vlora and a few km away from destinations like the Albanian Riviera, Karaburun Peninsula, Sazani Island, and many other locations for the fans of the great outdoors. While in the Vlora area you can go hiking, diving, paragliding, and many other recreational activities.
When to go: The castle can be visited all year round thanks to the warm climate
How to get there: Follow the Tirana-Fier-Vlora itinerary. 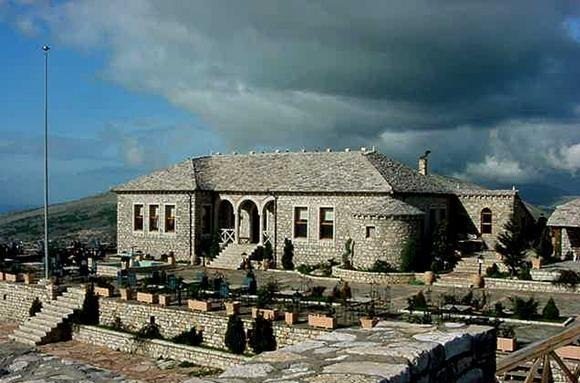 If you aim for the best, stunning views and history, Lekuresi Castle in the southern city of Saranda is the right destination. Historians say that the castle was built around 1537 during the Siege of Corfu by Sultan Suleiman the Magnificent. The Castle is located in a strategic position at the top of the hill and controls Saranda Bay and the road to Butrint. Lekuresi castle has a square structure and two round towers. The surrounding walls are about seven meters high and two meters wide. Nowadays, the castle is used for commercial purposes. It can be visited anytime. Many visitors, mostly foreign tourists prefer to walk up to the castle. It takes from 45 minutes to one hour to reach the top of the hill.

Best time to visit: any time of the year
How to get there: By sea from Corfu Island.
By road: take a bus or van from Tirana.
By car: follow Tirana-Fier-Levan-Tepelena-Gjirokastra- Muzina Pass-Saranda or
Tirana-Fier-Vlora-Llogara Pass- Saranda

Find the second part of the article HERE