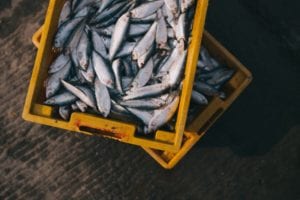 Albanian consumers have traditionally preferred meat and poultry products. Fish is consumed to a limited extent mostly in the coastal regions of the country. It is estimated that about 30% of the population in Albania prefers aquaculture products compared to the wild. In general, the prices for inland fish species (carps) are lower than the price for marine fish species. Farmed trout is sold only on the domestic market, while marine fish are mostly exported to the EU market and Balkan countries.
In recent years, the national average household consumption of fish and seafood has fluctuated, FAO puts the estimate at 4.9 kg in 2013. Based on calculations of the supply balance and the total apparent consumption of fisheries and aquaculture products, average annual per capita consumption decreased 8% between 2010 and 2013. 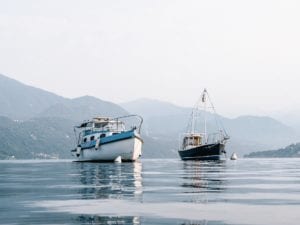 Albania is a country rich in water resources, with a 476 km coastline, of which 326 km stretches along the Adriatic Sea and its lagoons and the remaining 150 km faces the Ionian Sea. Albania has six small, uninhabited islands in the Mediterranean. There are eight large coastal lagoons that support commercial fisheries.
These range from Butrint on the Greek border in the south to Velipoja on the border with Montenegro to the north. The total lagoon area is about 10 600 hectares. They represent the most important part of coastal ecosystems. The fisheries sector in Albania is relatively small, but it is important from a socio-economic point of view as it is a significant source of jobs in coastal and remote areas.

Artisanal fishery covers all forms of fishing activity using fixed and selective gear such as hooks, fixed nets, trammel nets, and gill nets. The fishing fleet includes 581 vessels and is concentrated in the four fishing ports of Saranda, Vlora, Durres, and Shengjin. The largest port is the port of Durres with 111 vessels. Landings from offshore marine fisheries in 2017 amounted to 4 609 tonnes. Fishing in the lagoons added some 600 tonnes, while the coastal fisheries accounted for 1 074 tonnes.
About 40% of the vessels in the fishing fleet are small polyvalent vessels less than 6 meters long. Vessels above 12 meters represent some 43% of the fleet and are relatively old (more than 35 years). The main gears used are trawls (about 38% of the total number). 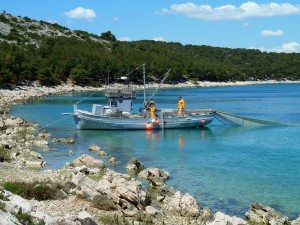 In Albania, there are 247 natural lakes with a total surface area of 1 210 sq. km, and eight main lagoons with a total area of 10 000 ha. About 800 fishers using gillnets, beach nets, and hooks are active in these inland waters. The inland capture fishery contributes a significant amount to the overall capture fishery. In 2017, the inland catch amounted to 2 007 tonnes, and the main species caught were carp, roaches, mullets, and eel.

The Shkodra Lake is the largest of the four and the fishery there is managed by the local fishery management organization (FMO). There are 420 members (subjects) in the FMO, each of which comprises two people and one boat. Members are allotted a certain part of the lake in which they can fish, but they can apply to the FMO to change the area if they wish to move to another part. Among the most valuable species caught in the Shkodra Lake are carp, roach, and bleak together with smaller amounts of mullet and eel.

Ohrid lake is famous for its endemic fish fauna including the Ohrid Trout (or Koran in Albanian / Salmo letnica) and the Belvica (Salmo ohridanus). 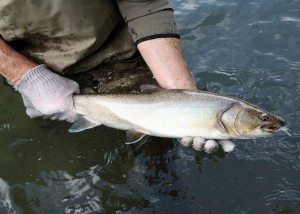 Aquaculture in Albania started at the end of the 1960s, originally based on common carp. During the past decade, Albania’s aquaculture production has expanded, because of an upsurge in all types of aquaculture activities. About ten species are cultured, of which the main ones are rainbow trout, mussels, cyprinids, sea bass, and sea bream. These are grown in all types of water environments such as water reservoirs, artificial and natural lakes, as well as in coastal lagoons and in marine cages.

Fish farmers use intensive, semi-intensive, and extensive cultivation techniques to grow primarily trout, mussels, and carp. In 2017, the total aquaculture production was 4 430 tonnes, 430 of which was mussel production.

Marine cage culture activities are concentrated in the Ionian Sea where gilthead sea bream (Sparus aurata) and European sea bass (Dicentrarchus labrax) are cultured. Mussels (Mytilus galloprovincialis) cultivation is concentrated in the Butrinti lagoon with some activity also in the open sea at Shengjini Bay (around 100 ha with floating lines). Trout farming in raceways is another important form of finfish aquaculture and is concentrated in the southeast of Albania, where numerous companies have their ponds. Cultivation of the endemic fish koran (Salmo letnica) is restricted to the area near Lake Ohrid. A few hatcheries are involved in the cultivation of common carp (Cyprinus carpio), Chinese carps such as grass carp (Ctenopharyngodon idellus), bighead carp (Hypophthalmichthys nobilis), and silver carp (Hypophthalmichthys molitrix) for restocking purposes. Carps are farmed in ponds.

The economic value of fisheries and aquaculture

The fisheries sector in Albania is relatively small, but it is important from a socio-economic point of view, often located in areas of high unemployment and socio-economic needs. Estimates put the contribution of fisheries and aquaculture to the GDP at only 0.3%.

The fisheries sector is a significant source of jobs, the marine fisheries employ about 2 250 persons. In addition, 2 100 fishers are directly engaged in inland fisheries. Unfortunately, there is no accurate data on the indirect employment of women that besides household or farm work are mostly engaged in the ancillary services like fishing net repair and maintenance and inland aquaculture and fish processing. The processing industry employs a majority of women. 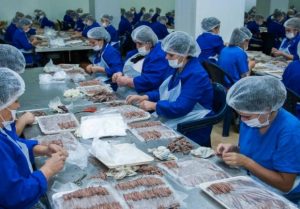 The fish processing industry is concentrated in areas around the main ports of Shengjin, Durres, and Vlore. There are six fish processing companies in Albania. Four of them produce anchovy, sardine, and other small pelagic species for export primarily to the EU, while two are specialized in frozen fish products. Some of them are: “Koral Fish” processing company located near the highway Tirane-Durres, “Rozafa Seafood” in Shengjin, “Konservimi Adriatik” in Durres, and the successful “Nettuno” in Elbasan city.

The development of the aquaculture sector in the last several years has followed domestic consumer demand, especially for marine finfish products. To cover domestic demand, Albania imports marine aquaculture products, mainly sea bass and sea bream, from Greece. The total imports of edible fisheries and aquaculture products amounted to 20 000 tonnes in 2017, a 29% increase from 2016. Most imports originate from Spain and Croatia; 24% and 14%, respectively.

In 2017 the export value of edible fisheries products amounted to €82 million. The main destinations for Albanian exports are Italy (57% of the total volume) followed by Sweden (11%), and Spain (7%). For the Italian market exports concentrate on canned anchovies, as important Italian trademarks opened plants in Albania taking advantage of the lower labour costs.

The species of fish that live in Adriatic and Ionian seas and inland lakes are:

If you are looking to export fish food from Albania, are looking for a fish processing company or have any additional question, please use the contact form below so that we can assist you.