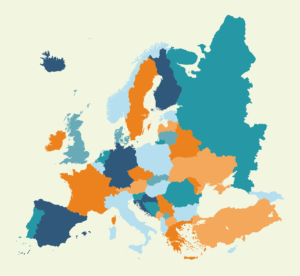 If you are taking into consideration to outsource some services or parts of your business and have already created a strategy, Albania can be your flexible and cost-efficient Business Process Outsourcing solution. BPO is not a new sector in the Albanian economy.

The practice continued since in the first years of post-communism when foreign companies from the garment and footwear industries established their factories in Albania and employed thousands of people. The trend of outsourcing has increased mainly in fields of client and digital services such as call centers, web development, design and copywriting companies.

Albania is climbing as an outsourcing center in Europe and it is growing in popularity. The country is attracting European companies and businesses because of its affinity to Western Europe and several other crucial reasons that companies are looking for when they plan to implement a successful outsourcing program. Currently, Albania ranks among the emerging destinations in the global IT-BPO service delivery landscape.

The emerging Business Process Outsourcing industry in the country is displaying signs of future potential offshore outsourcing and aims at gaining prominence in the region. In order to achieve this, it relies on significant factors, while it pool size can compare to Bratislava in Slovakia, Krakow in Poland and it is larger compared to Riga, Tallinn, and Vilnius. Based on the data provided by the Albanian Investment Council total industry size is estimated to be between $120mln and $140mln and the sector employees between 25,000 to 32,000 professionals.

Why Outsource to Albania

Being still a developing country with a fragile economic system based on the service sector and tourism, Albania offers low labor costs for companies that are interested in outsourcing their services. Also, the taxation system is very favorable given that the tax on profits is only 15%. The procedures for opening a business in Albania are very simple and at low cost.

Albania has a very strategic location. It is located in the heart of Balkans, in front of Italy and bordered by Greece, Macedonia, Kosovo, and Montenegro. Flights to other European countries last no more than 3-5 hours and the country is currently opening the second airport in Kukes northern city, near to Kosovo.

Number of employees in the BPO Industry

The major outsourcing hub of the country is capital city Tirana, followed by Durres, Vlora, Shkodra, Elbasan, Fier, and Korca.

The major BPOs in Albania are:

The current major client markets of Albania for BPO are Italy, Switzerland, and Germany.
Cooperation between the government and the private sector help in terms of infrastructure, skills, marketing and branding, and innovation are expected to have a positive impact on the PBO sector. You can find detailed information and data in the BPO sector in Albania in the following publications by Risi Albania BPO in Albania, A Compelling Business Case and Albania, Your Next Nearshore Destination