2018 was the Nationwide Year of Skanderbeg. Albanian institutions and citizens all over the country observed the 550th death anniversary of National Hero Gjergj Kastrioti Skenderbeu. The name and life of the most prominent personality in Albanian history are strongly connected to the city of Kruja. 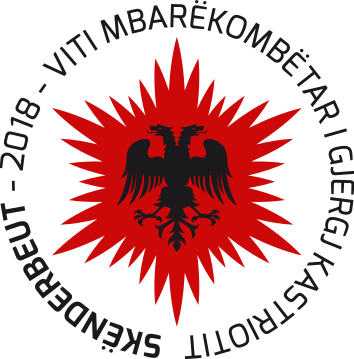 The official logo for 2018, The Nationwide Year of Skanderbeg, credit Wikimedia

A must-visit destination in Albania, located about 37 km away from the capital city, Kruja lies on the lower rugged slopes of a mountain named after the city.

You can reach the city from Tirana by bus or by car. Go to the Bus Station for the South and Northern Region at Dritan Hoxha Street,  at Kamza turn (Kthesa e Kamzes). Tirana e Re, Kamza, and Instituti city bus lines stop near the station. You’ll find the place near to the van drivers yelling Durres, Durres, hajde Durres. According to the timetable listing, there’s a bus from Tirana to Kruja at 10:00, 11:00, 13:00, 15:00, 17:00, 18:00. The bus ticket price is Lek 100 or €0.79 (depending on the exchange rate) for the short trip on air-conditioned buses.
The road follows the itinerary Tirana, Kamza, Fushe-Kruja, Kruja. With the exception of a few road sections near Fushe-Kruja that need improvements, the road is OK. It meanders through olive groves in the beginning and into a pine forest as the bus climbs the hilly terrain.
If you’re going to drive be careful in the serpentine road and keep in mind that driving in Albania can be a headache.

The city is quite vertical, not to be confused with the modern architectural trends, but small enough to explore on foot. It shares some common traits with the southern coastal villages in the Ionian Riviera, but the sudden cold gust of winds even in summer days remind you that the south is far away.
Now you’re here, what to do?
Do what Albanians do, find a coffee with a view and enjoy the view over the terracotta roofs to the Adriatic Sea, a trophy that can be earned as soon as you order a nice expresso, a Turkish coffee, or any type of raki that the house has.

The next place to go is the Bazaar of Kruja or Pazari i Derexhikut for Kruja people. The local people and Albanians take pride in the old Bazaar of wooden shops, one of the best-preserved in the entire region. Along with the castle, it is the main source of income and economic growth for local people.

Here you can find souvenirs that vary from handmade rugs, jewelry, traditional clothing, old tools, and items. The cobblestone street of the bazaar is often full of tourists, especially from Russia. This explains why almost all the shopkeepers, young and old speak English and Russian. If you like something, don’t hesitate to negotiate the price and to make sure that it is a local handmade product. There are a lot of products arriving from China and Turkey that are sold in the market, a phenomenon that is affecting local artisans. Last Sunday there was a group of Asian tourists buying Chinese scarfs. The counterfeit copies of Skenderbeu’s statue, traditional clothes, and qeleshe (the Albanian wool hat) are cheaper and easy to produce, compared to handmade rugs and other products that need weeks of work. The artisans of Kruja are worried that their crafts and skills are dying out because younger generations have other interests or want to leave Albania.

The Castle of Kruja

The cobblestone street takes up to the Castle of the city. Advice: Wear comfortable and nonslip shoes. The castle was a stronghold and the heart of resistance and a major obstacle to the expansion of the Ottoman Empire in Western Europe. The castle resisted three sieges and it finally fell in 1478, ten years after the death of Gjergj Kastrioti. The castle has an elliptic shape and it is found in rugged hilly terrain and it covers an area of 2.5 hectares. Due to the presence of a water spring within its walls, the castle never suffered from the lack of water supply.
Nowadays, visitors to the castle can explore the Skanderbeg’s and the Ethnographic Museums. The ticket for entering each of the museums is Lek 200. Tourists can see a copy of the helmet and the sword of Scanderbeg in the main hall, the flags, and stems of important families of that time who supported the national hero.
In the meantime, the National Ethnographic Museum is located in an old building of the Toptani family, built in 1764 in the courtyard of the medieval castle, in front of the National Museum of Scanderbeg. The walls of the museum have 250 years original morals, ceilings carved in wood, very rare furnishings, old-style rugs, and traditional costumes. Inside the house is a steamy Turkish bath, one of the only left in Albania. The museum has also 1,200 original objects which are living proof of old Albanians’ lifestyle and traditions, mostly in XVIII-XIX centuries.
On the premises of the castle, there are the ruins of buildings from different periods and a few restaurants.

Sari Salltik is a religious site and a viewpoint at the summit of Kruja Mountain. Hundreds of pilgrims visit the shrine and many believe that it is a place where miracles may happen. The place can be reached by car, or by foot. It takes about two hours to walk from the city up to the mountain.

When you start to get hungry the best thing to do is to go where locals eat. Don’t look for international cuisine. Instead, try local dishes and specialties. Kruja is not the place to eat pizza or spaghetti.
Return to Tirana
The last bus to Tirana leaves at 16:00 hours, but vans to Fushe-Kruja offer transport service until 19:00 hours. In Fushe-Kruja you can take the bus line to Tirana. The entire trip will cost Lek 120 or €1.
Enjoy the trip!