As the country is preparing for the official opening of the tourism summer season in coastal cities, the opportunities for tourism in Albania are endless.

Curraj i Eperm is one of the most remote villages in northern Albania, with untouched natural landscapes and one of the less explored places in the country.

Situated in the Nikaj-Mertur area, in the western part of Tropoja district and bordered by the Dukagjin area of Shkodra, this village has a typical alpine panorama and climate. It is surrounded by green meadows full of flowers and colorful plants and high alpine ridges such as: Maja e Hekurave, Grykat e Hapeta, Maja e Kakise (2360m), Maja e Ndermanjes (2250m). The Nikaj-Merturi meadow is permeated by two rivers, Nikaj and Mertur rivers which flow into the Drin river. 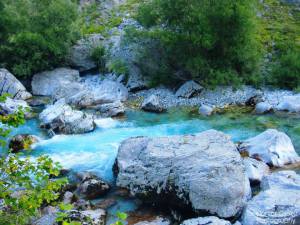 Since in October of the past year, the Nikaj-Mertur area has been announced as a Regional Nature Park and included in the list of National Parks of Albania for being a touristic area of high potential.

Curraj i Eperm (Upper Curraj) is a very attractive area for hiking, trekking, for exploration adventures by backpackers, ect. Locals are very generous and hospitable regarding foreigners and offer shelters and bio food produced by them.