The General Maritime Directorate has released a statement on its official FB page yesterday, on 30 July, triggered by the recent incident that took place a few days ago, at the port of Vlora where a tourist ship caught fir with passengers on board. The statement says that during this summer season, there are 15 ships, with a passenger capacity of more than 12, that operate for tourist purposes at the port of Vlora.
However, driven by the last situation where a ship called ‘Aquamarine’ caught fire, risking the lives of the people on the deck, who thanks to their fast reaction and capabilities were able to save themselves, the Port Captain of Vlora has taken a set of measures and controls, in order to avoid these kind of incidents in the future.

During their investigation, Port Captain of Vlora found that 98% of these tourist ships comply with the certificate of Albanian maritime register, which is responsible for the number and type of the firefighting equipment, based upon the type and capacity of the ship. Those ships, that didn’t fulfill the requests, regarding the firefighting equipment on board, were blocked until they do.
Also, another measure taken regarding the tourist ships with a passenger capacity of more than 12 people on board, was that they were banned from sailing at night, with passengers on board. The statement by the General Maritime Directorate closes by calling on all tourists, individuals or authorities, that if they see any breaking of the law during their trip with the tourist ships to denounce them at the Port Captain of Vlora because the measures will be harsh upon them.

Below is the full statement by the General Maritime Directorate: 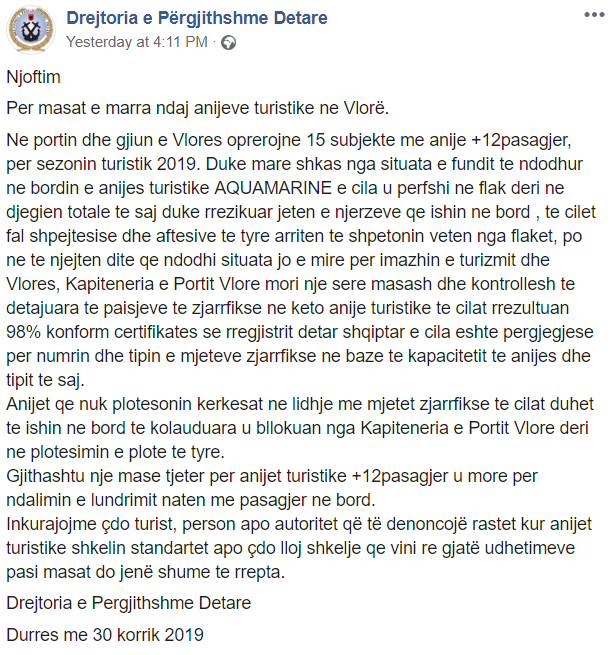