Types of Fish in Albania

Carp is a species of fish that lives in freshwater belonging to the family Cyprinidae. Common carp in length is between 40cm-80cm, and some species of carp could weigh up to 25 kg. In 1653 Izaak Walton wrote in The Compleat Angler, “The carp is the queen of the rivers; a stately, good, and a very subtle fish”.
Although in the past, the carp was an important aquatic food item, as more fish species have become readily available for the table, the importance of carp culture in Europe has become less important. Demand has declined, partly due to the appearance of more desirable table fish such as trout and salmon through intensive farming, and environmental constraints. However, fish production and hunting in ponds are still a major form of aquaculture in Eastern Europe, including Albania.

The mullet is a fish of salty waters, that is present in the Ionian and Adriatic Seas. It lives in herds and could weigh up to 5 kg. In Albania, there are registered 8 different species of mullet. The mullet feeds with almost anything, also it is food for many predators, other fish. It is found during the whole year near the shores but swims to the river mouths too. They are also found near the ports, where many of them feed on the waste that the ships throw onto the sea. The mullet has different tastes, depending on where it is hunted. For instance, the mullet collected near the ports it is not so tasty compared to other mullets. It is a fish that could adjust pretty well to the environment and the conditions where it is lives. 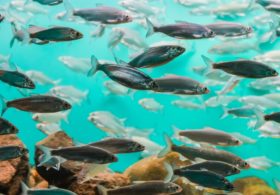 The bass is one of the tastiest fish, that it is grown in the Albanian seas. It is found mostly during the wintertime, near the coasts. It feeds on other smaller fish, like mullet, swordfish, etc. Very rarely it could weigh up to 14 kg. It is a ruthless predator, which feeds almost entirely on alive fish. After ’97 its number was reduced dramatically, because of the hunting with dynamite. It swims to the depths, going to the floor of the sea, where it lays its eggs between the months of February-March. This fish goes to the river mouths too, but not as much as the mullet. Bass has white and tasty flesh.

Turbot or known also as rombo, is a type of fish that lives in the seas that have a sandy floor. It feeds on other fish. It is in the shape of a spinning top and has the ability to hide in the sand from the fishermen, and also it hunts for itself. It could weigh up to 5-6 kg. It is delicious. Near the shores, it is found almost throughout the year, but mostly in the months of October-November. There are two species of turbot: one is very particular, with spikes on its spine and it is very tasty. To try the taste of this kind of fish, it should weigh no less than 2 kg. Turbot is found mostly on Adriatic waters.

The eel is a fish in the shape of a serpent, with an orange color. It has sharp teeth and it feeds on other fish too, mainly dead. It is found in the Adriatic Sea and Ionian sea too. It prefers rocky ends. It could have a length of 2 meters and could weigh up to 50 kg. It is not considered a preferred fish food, because of its many bones.

Swordfish has a gold color, and it is found in both Albanian seas. It is very tasty food for the people, as well as for other fish. It is named sword-fish because it has a mouth in the shape of a sword, with small teeth. It feeds with other fish, and with other smaller swordfish. This type of fish attacks its prey thanks to its pointed, flat bill, then it swallows it. The characteristics of this fish are: it has a blue color and it doesn’t have bones, besides the spine.

The Ohrid Trout or Koran is a fish closely related to salmon endemic to Ohrid lake. Meanwhile, the common trout live in freshwater lakes and rivers exclusively. Trouts are an important food source for humans and wildlife, including brown bears, eagles, and other animals. They are classified as oily fish. Trout generally feed on other fish, as well as shrimps, insects, zooplankton, small animal parts, etc. As a group, trout are somewhat bony, but the flesh is generally considered to be tasty. The flavor of the flesh is heavily influenced by the diet of the fish. For example, trout that have been feeding on crustaceans tend to be more flavorful than those feeding primarily on insect life. Trout could weigh up to 30 kg and could live many decades.

The harvesting of date musses is an outlawed activity in Albania, due to the endangered status of species and to the huge damage caused to the seabed by illegal harvesters. Despite this fact, it is often found on restaurant menus. Anyone selling or serving date mussel is breaking the law.

Date mussel with its scientific name Lithophaga lithophaga (which comes from Greek and it means to eat the rock) in Albanian is known as the ‘stinger of rocks’ because it punctures the limestone cliffs and hides inside them. It is called also the persimmon of the sea because of its shape and color that resembles the persimmon. The shell of this mussel is composed of two equal hinged halves, it is narrow, extended, partly cylindrical, and pressed on its front side.

From the outside, the shell has a brown color, bright or dark, whereas from the inside is white, often with yellow and blue nuances. The average length is between 6cm-8cm, and the maximum length could reach 10cm-12cm. This type of mussel is spread throughout the Mediterranean Sea.

The sea bream or gilt-head bream (Sparus aurata) is a fish of the bream family. It usually reaches about 35 cm in length but may reach up to 70 cm and weigh up to about 7.36 kg. It is found either in small groups near seagrass or on the sandy floor, but sometimes in river mouths as well during the spring. It mainly feeds on shellfish, but also some plant material. It is considered the best-tasting of fish breams.

If you are looking to export fish food from Albania, are looking for a fish processing company, or have any additional questions, please use the contact form below so that we can assist you.