Living in Albania in 2019 was either cheap or expensive depending on what standard it was compared with. The Eurostat survey on the price levels of goods and services shows that the cost of consumer goods and services in Albania was at 57 percent of the EU average. This rate ranked the country among the most affordable countries in Europe. However, from a regional point of view, Albania ranked among the most expensive countries along with Montenegro and Serbia. The overall price of goods and services in the country was higher compared to Bulgaria and Romania, respectively 53 and 55 percent of the EU average. The survey covered six main categories.

Highest in food and non-alcoholic beverages and clothing

By category, Albania was the most expensive in the region for food and non-alcoholic beverages as prices were at 82 percent of the EU average. Moreover, at 97 percent of the EU average, Albania had the most expensive prices for clothes. This sounds surprising given the fact that for many years the apparel and footwear industry in Albania has been booming as countless brands including popular luxury brands outsource at least some processes to Albanian apparel manufacturers.

Further on, the price of consumer electronics in Albania in 2019 was six percent more expensive compared to the EU. Only Serbia had higher prices for this category at 113 percent of the EU average.

Least expensive for accommodation a restaurants 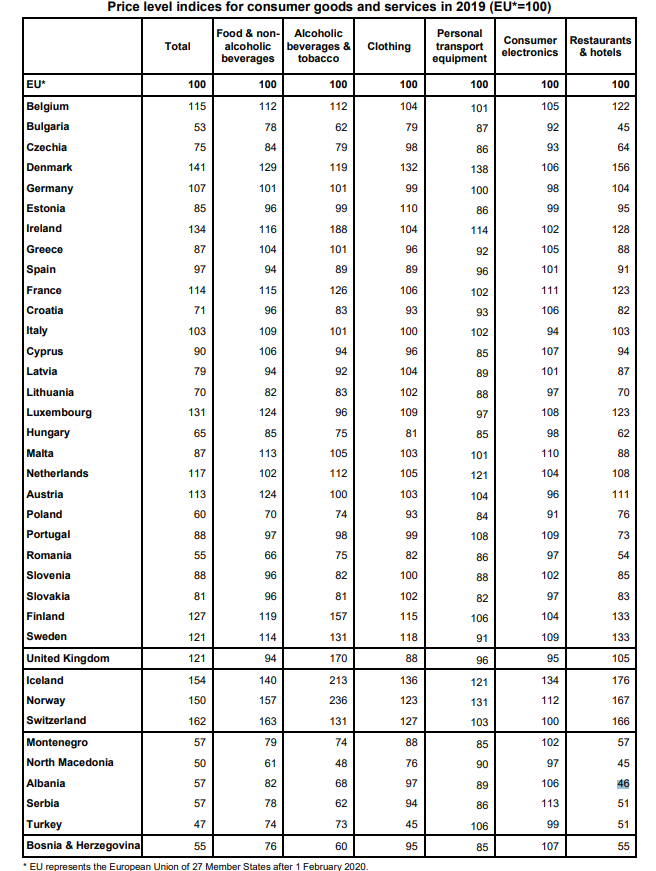