Starting from April 2017, Wizz Air low-cost airline will start operating new routes connecting Albania with Hungary. This became official on Tuesday when a memorandum of understanding was signed in Budapest by the Albanian Minister of Transports, Sokol Dervishaj and his Hungarian counterpart Miklos Sesztak.
Speaking about the memorandum, Dervishaj highlighted that low-cost flights from Budapest to Tirana and vice-versa is a positive development for Abanians, who can use Budapest for transfer flights. Moreover, it will open the Albanian market and decrease the price of flight tickets. He also said that Wizz Air will have a positive impact in the tourism sector and trade. 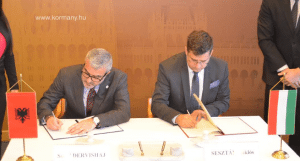 Minister Dervishaj, also stressed that one of the main priorities of the Ministry of Transports is Kuksi Airport.
“We would like to pay attentions to Wizz Air chances for operating directly in Kuksi Airport, Dervishaj said.
On his part, Sesztak said that this is a historic memorandum because both sides benefit from it and most of all people will benefit from it. He also welcomed the proposal regarding Kuksi Airport.
Further on, both sides discussed possible cooperation in other sectors where Hungarian companies may be interested. According to Minister Sesztak, Hungary is interested in investing in Albania in the maritime, air and rail transport. Both officials agreed to continue their meetings in order to concretize cooperation in the above-mentioned sectors.