Theth National Park is one of the most visited touristic spots in Albania. With a very old tradition, Theth village has a lot to offer to foreign tourists that are curious about lifestyle and old traditions which still get practiced by locals. Despite natural beauties, a very interesting element of Theth village is Kulla, a typical house of this village.

Kulla served once upon a time as a shelter for families involved in blood feud. Men of the family used to confine themselves inside Kulla, otherwise they would get killed by people they had conflicts with. 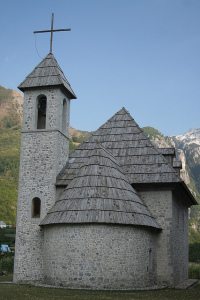 The region has a lot of old traditions, values and lifestyle elements which impress foreign tourists and writers as well. The winner of Nobel Prize in Literature for 2013 Alice Munro has written a book called “The Albanian virgin” that tells the story of a foreign girl who due to an accident while exploring Balkan, ends up kidnapped by some member of Geg tribe. As the story comes to its peak, the writer describes many traditions and customs of Geg tribe, which have lived in northern Albania.

But Kulla is not the only element that recalls the old culture and traditions of this region. If you visit it, you will see that old women still wear their old traditional costumes, still cook old and traditional dishe and still behave in a slavish manner towards their husbands and male family members.