This is not an original article of invest-in-albania.org. The original piece was written by Elizabeth Gowing and published at BBC.

The weather-beaten forms of cuddly toys hanging from buildings are a common sight in Albania. Who put them there, and why? Suspended from the eaves of houses, they sway gently in the wind. The bodies are distorted, storm-drenched and smut-stained. Rabbits are hung by their ears, chubbier animals suspended by wire garrotes. A bloated creature is spiked on to the reinforcing rods which protrude from a half-finished building. What is this spate of teddy bear suicides? 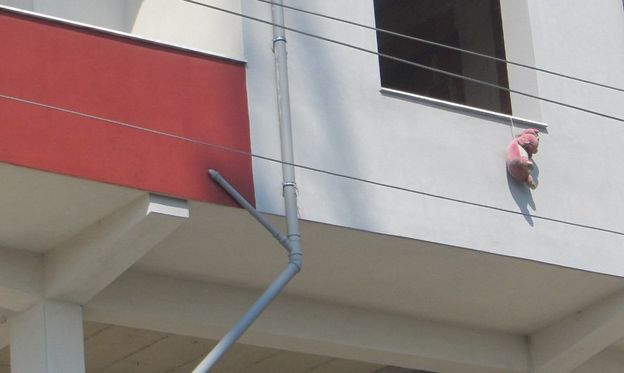 Driving through Albania you can’t fail to notice the stuffed toys hanging outside homes and business premises. In Albanian they’re just called “majmune”, meaning “monkeys” – the word used for any soft toy. When I took a random sample of houses in three Albanian suburbs I found a visible monkey suspended from approximately one in eight buildings.

So today I am visiting the Tirana suburbs of Babrru, Paskuqan and Kamez and houses representing a cross section of Albanian architecture, from crumbling brick to stucco and balustrade pretensions, to ask people just why their homes are decorated with these ill-kempt, oversized animals.

Is it to do with religion? I ask. But whether the answer comes from a Muslim or a Catholic, it’s the same – a shrug. “Religion isn’t important,” says one man. Eventually the homeowners admit it – it’s something more serious. The monkeys protect against the evil eye. 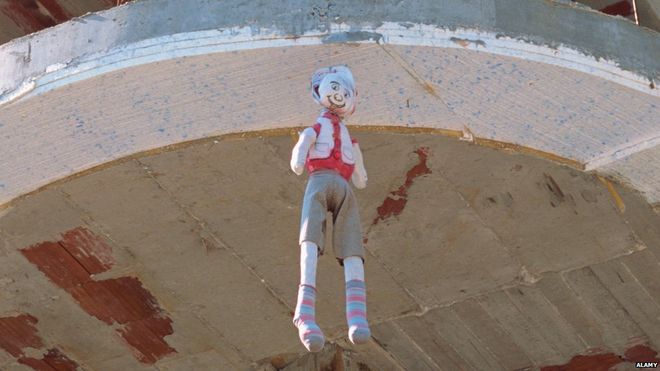 If you’ve got something nice, others are going to want to take it from you, they explain. If the evil eye sees even a beautiful stone – one man recently arrived from the mountains of northern Albania moves his hands with a highland builder’s enthusiasm for just how beautiful a boulder can be – then the eye would split that stone, “just like that”.

“It stops the evil eye seeing our money,” says one man outside his bustling furniture workshop. He is pleased to talk to me, full of reminiscences of his time working in London’s Gloucester Road four years ago. He explains that at first he hadn’t hung a monkey up when he was building this place. “And then the police came. They were causing trouble. My son went out and bought a monkey and we’ve not had any trouble since.” 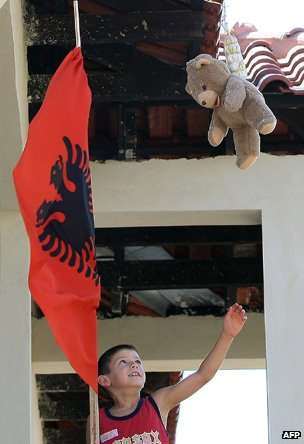 One monkey is guarding a house built with money sent back by a daughter who works as a chambermaid in Italy. Another is being built with money earned abroad by a man called Vladimir – he grimaces when he says his name, “It’s Russian,” he concedes, and hastens to tell me that he was born in 1972 when Albania was in thrall to communism. His building is watched over by a creature whose nylon fur has been matted by dirty rain to a slick wolfish coat.

He’s only back in Albania briefly to do some work on his flat – he’s been in Greece earning money as a builder for 18 years. He says there’s no work in Albania. But they’ll come back eventually to live here. He gestures at his mother’s handmade lace mats. Lying in a fine lamina of gentility on every surface. We speak in Albanian but he says, “Everything is gusto,” using the Italian word for taste. The foreign influences on Albania have shifted significantly since baby Vladimir was named, and his monkey is guarding an apartment being built with Greek money and Italian aspirations.

When I ask these proud, careful householders where the idea for the monkeys came from, none of them can say. Of course the idea of luring evil away from special places is not unique to Albania, and in the gurning of some of the stuffed toys I am reminded of gargoyles and grotesques on medieval churches.

Garlic, too, is commonly used, here, as elsewhere. At one house I visit, there’s a plait of it hanging on the outside of the building, tangled up with not one but three soft toys – together with a way of warding off evil that goes back “to our forebears” as Gjylsime, the householder tells me. This is a ram’s skull with horns. “We killed that animal for the meal we cooked for the workers on the house when the building was finished,” she tells me. The garlic seems likely to be an ancient tradition – but according to her and everyone else I ask, using soft toys against the eye started only in the nineties “with democracy”. 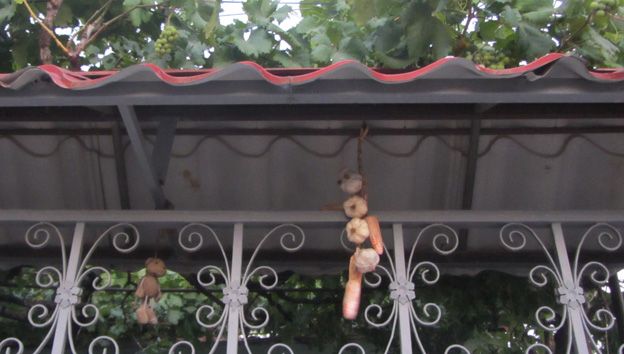 These monkeys, then, are the household gods of capitalism. More powerful than religion, even than nationalism, in what was once an officially atheist state. One of the homes I visit is owned by a retired miner. His house is protected by a bedraggled grey monkey, the size of a small child.

“I put it up as soon as the house was built,” he says. “There was an Albanian flag with it too, but I took that down – it goes up only for holidays and celebrations. The monkey stays.”

Previous PostThe Legend of Rozafa, the Woman Buried in the Foundation of a CastleNext Post‘Bild’ German magazine : Albania? Yes, why not?

“Global Village” was one of the most interesting youth activities of the weekend we left, organized by “AIESEC European University...