The Albanian economy is currently operating at 66 percent of its investing capacities and many sectors are suffering from over investments made during the last years, Monitor magazine reported during the weekend.
Based on the data that the magazine has collected from the Bank of Albania (BoA) and the Institute of Statistics (INSTAT), some sectors of the country’s economy are overfed with investments. 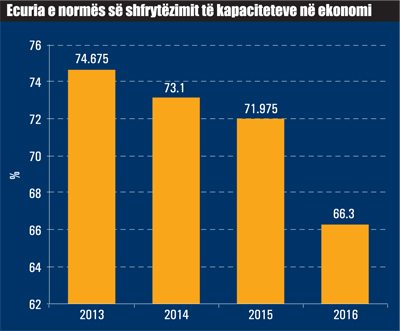 Currently, the oil sector reports about Euro 350 million over investments that are not being used. Enticed by some major energy projects presented by the former government before 2008, some of the largest oil traders increased hydrocarbon storage capacities. Thus, according to the Hydrocarbons Association, some 750,000 tons of capacities are not being used.
So far, 600,000 tons of capacities are stored in Porto Romano area in Durres, 150,000 tons in Vlora, and 70,000 tons in Shengjin. The same sources confirm that over Euro four billion have been invested in ports’ infrastructure, storage capacities and hydrocarbons distribution during the last decade. On their part, investors say that about ten percent of these investments is not being exploited.

Over Euro 50 million more than needed have been invested in the brick manufacturing sector. According to the chair of the Association of Brick Manufacturing Industry, Vahid Ruli said that 11 factories were built during the last two decades. The cost for a brick factory is over Euro eight million thus the total investment in this sector was about Euro 100 million. Six out of 11 factories went bankrupt during the last four years while the other five operate under the investment capacity. They exploit about 30-40 percent of their capacities. Ruli said that this sector is facing several problems related to high energy price, increased taxes, and low demand.
According to local operators, four years ago the daily production was 4,000 tons. Meanwhile, now it is 2,000-2,500 tons daily and it is built to stock.

The annual production capacity of the domestic cement industry is three million tons while the market demand is less than one million tons. Meanwhile, cement imports for 2015 covered about 40percent of the market demand. Although the cement market is fed by domestic production, about half of the demand is provided by imports. The only way for domestic factories to survive would be a reduction of imports. On the other hand, cement producers say that ports lack the necessary infrastructure what would help to increase exports. The Port of Durres needs interventions to deepen its basin for providing access to large cargo ships and a special terminal for cement export. Like brick export even cement faces a high scanning tax and long time wasted in customs. Currently, cement producers export to Montenegro, Macedonia and Greece. 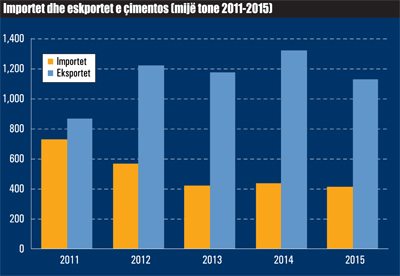 Tirana-Durres area has the higher concentration of commercial centres space, and it is expected to increase as two new commercial complexes will become functional. Currently, the indicator is 200 square meters for 1,000 inhabitants, which compares to other developed countries in Western Europe where purchasing power is higher than in Albania.

The industry sector, on its better days back to 2008, was able to use no more than 70 percent of its capacities. Consumer goods and processing industries had their higher percentage of production. Since 2008, the industry sector reduced the exploitation of its capacities. Processing industry has nine percent of the active enterprises in the market while the extracting industry is the sector with the higher percentage of investments.

Even though the service sector has increased during the recent years, it used about 68percent of its capacities during the first quarter of 2016. Albania has based its economy on service and trade activities and this sector makes 52 percent of the Gross Domestic Product (GDP). It also has 57 percent of the labour force in the country. The sector of vehicles and immovable properties consist each of seven percent of Albania’s GDP. 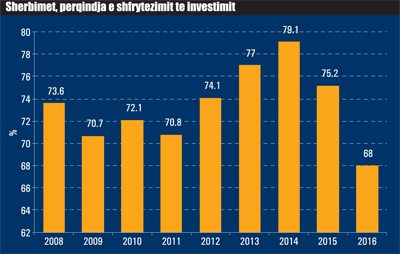 This is the sector with the highest rate in terms of investment capacity use at a level of 73.5 percent for the first quarter of 2016. Based on a survey conducted by BoA, the expectation of businesses regarding consumers demand are low, which means that level investment capacity exploitation may decrease.