This is not an original article of invest-in-albania.org.  The original article was published by Newsweek and written by Harry Eyres, under the title “Europe’s internal frontier: Albania has long been a mystery to the West”.

I always thought the extremely ancient, shaggy, white-haired character in the long-running TV series The Wombles was misnamed: he should have been Great-Uncle Albania, not Great-Uncle Bulgaria. Bulgaria, after all, is relatively staid; it is even a member of the EU.

Albania is the truly wild and woolly European nation: Edward Gibbon called it “a country within sight of Italy less known than the interior of America”. Completely closed for decades during the paranoid dictatorship of Enver Hoxha, Albania has been opening up for a while, but still seems to receive less attention than it deserves.

A couple of stylish gestures have recently made the news: four Albanian religious leaders, Catholic, Orthodox, Muslim and Bektashi, marched hand in hand in Paris on 11 January in support of the victims of the Charlie Hebdo massacre; at the same march their prime minister Edi Rama sported a tricolour of blue, white and red pencils in his breast pocket, defending both freedom of speech (he is a writer) and supporting the wounded Republic.

I must admit that my interest in the Albanian-British Festival of Culture in London and Anglo-Albanian relations more generally, has personal or familial roots: my great-grandfather was the first British ambassador to Albania in the 1920s and maintained close ties with the country until his death in 1944.

He was not the only Englishman of his generation, and earlier ones, to have a strong and, perhaps, rather romantic interest in a country stuck in a mysterious warp of time, space, culture and religion.

The poet and artist Edward Lear spent several months visiting Albania and Macedonia in 1848 and published a beautiful and fascinating illustrated travel-diary, Journals of a Landscape Painter in the Balkans, in 1851. Lear and his work are celebrated in an exhibition at Europe House of paintings by the Albanian artist Bashkim Izano, inspired by Lear, which is the centerpiece of the Festival. 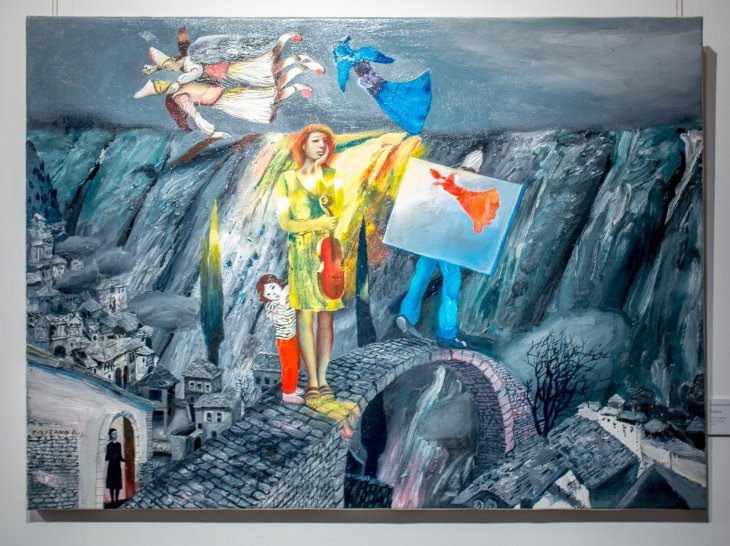 A certain romanticism informs the work of both painters but Izano’s is the more fantastical and surreal. In fact Izano’s large and quite gaudy oil paintings appear more influenced by Lear’s nonsense verse, and the accounts of his adventures in the Journals, than by his relatively conventional if exquisite landscapes.

Dervishes in tall hats dance or wrestle in mid-air, suspended above phantasmagorical landscapes that recall El Greco’s view of Toledo. Folklore is alluded to then subverted, especially in the painting in which a group of young girls divest themselves of heavy traditional garb.

Lear does mention “some few … very pretty” girls but the stronger connection is the dervishes: one night in a “pig-sty dormitory” Lear was kept awake by “a whirring, humming sound, followed by strange whizzing and mumblings”. These turned out to emanate from a dervish gyrating on the floor above.

Lear’s affection and fascination for and with Albania shine through the pages of his journals. He loved the magnificent landscape, flora and fauna, and seems to have inspired affection and amusement among the people he met: his imitations of a train and steamboat reduce a young Turkish nobleman to helpless giggles. Izano returns the compliment, portraying Lear as a kind of English dervish, a tender hierophant of imaginary worlds.

Influenced by surrealism and the work of Chagall, Izano’s homage to Lear is free of the restrictions or prudery of Victorian England. Eroticism is more frank and does not have to be expressed obliquely, through the poignant impossibilities of the owl and the pussycat or the Yonghy-Bonghy-Bo. But if Izano has freed up Lear’s sexuality, Lear may have liberated Izano’s imagination.

The most distinguished contemporary manifestation of Anglo-Albanian relations is the work of the historian and polymath Sir Noel Malcolm. Malcolm’s interest in Albanian culture and history was intensified by the wars of the 1990s in the former Yugoslavia. He foresaw the attempted ethnic cleansing of Kosovo and dispelled bogus historical claims in Kosovo: A Short History.

His achievement in his latest book Agents of Empire: Knights, Corsairs, Jesuits and Spies in the Sixteenth-Century Mediterranean World is to show how a distinctively Albanian strand is woven into the history of relations between Western European powers and the Ottoman empire; or to put it in his words, to see how “Albanians crop up everywhere”. The result is as fantastical as anything dreamt up by Lear or Izano.