This is a very unique real story that happened to Marc Oliver Ruelhe who visited Albania as a tourist and was impressed by the attitude of an Albanian girl which had kept safe all the personal cards he forgot in an internet-coffee, in the southern small town of Orikum. The article was first published at Huffington Post Deutschland Edition.

This is a personal experience which I want to share with others and is not about a travel report but for the story behind a letter that came to my mailbox. Me and my friend Feliks visited Albanian coastline, its Riviera from Montenegro to the territory bordered with Greece. Then, inland we visited Albanian Alps, a fantastic combination.

But, in an internet-coffee and gambling center (Albanians love them) in the small city of Orikum, Feliks forgot his credit card, the ATM card and his personal ID card, all together in a small sized plastic bag. He noticed that his cards were missing one day after we had visited that internet-coffee, near to a stunning bay, kilometers away from Oricum. We had no phone waves and were very worried about the documents. We came back to the internet-coffee and the staff recognized us but no one remembered anything about what we were looking for, even after we revised the security cameras.

Feliks blocked all of his cards after making a call in Germany. Losing you personal and credit cards in Albania, in one of the poorest countries in Europe, it makes you prejudice about its people. However, this was a hasty generalization. One month later a letters came from Italy, with an unknown sender.

“Dear Feliks, I am Florika, I am an Albanian living in Italy. This September I was in my homeland in Orikum and I found your credit cards. I wrote a message in your Facebook account, but I did not receive a reply. Now I am sending you this letter from Italy. We never used your credit cards and we hope you solved the problems after losing them.” 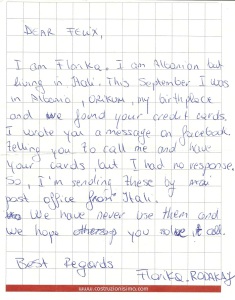 This is an argument that disproves all the clichés related to Albanians. After this, I ask myself why foreigners have all these offensive feelings about a country and a peoples we know nothing about?