This is Vjosa or Aoos, one of the 14 individuals comprising the Albanian population of the Egyptian Vulture (Kali i Qyqes). Named after the river, Vjosa travels over 10,000 km every year from its home in southern Albania to a region between Cameroon and Chad in Africa.
The bird nesting in an area nearby the town of Permet was captured and tagged by the Hellenic Ornithological Society (HOS) in April 2015 in Greece with a solar power transmitter. 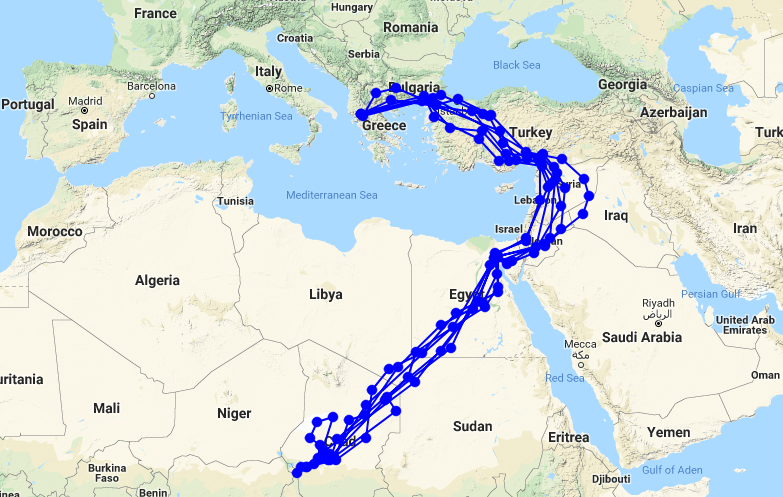 Therefore, they have been able to trace Vjosa’s itineraries. The bird spends the winter in Africa and now it has started the return route. Specialists from PPNEA say that hopefully, Vjosa will be back home in March. Thanks to the transmitter, it is possible to trace Vjosa’s movements. Given that the data is at least one month old, the poachers can’t trace the bird.
If you’re curious, you can trace Vjosa here.

A 2018 census of Egyptian vultures led by Protection and Preservation of Natural Environment in Albania and Hellenic Ornithology Society, BirdLife in Greece reveals a new territory occupied by the species but a slight decrease in the number of these critically endangered vultures in Albania. According to PPNEA compared to 2017, the population has decreased with one individual but the number of occupied territories has not changed.

Overall, the population of the Egyptian vulture in Albania has remained more or less stable in the last five years.
Albania has been among the 10 Mediterranean countries worst hit by the Illegal Killing of Birds with circa 270 thousand birds illegally killed every year during 2004-2014. Vultures, although a rarity in the country, have often been subject of poisoning, trapping and poaching with pieces of evidence registered even in recent years. The 2018 estimation, based on expert opinion and data collected through relevant stakeholders and social media groups, shows that at least 1-3 individuals of vultures’ species are approximately killed every year.

To save an endangered species, the Egyptian Vulture, institutions, and organizations from 14 countries spanning the Balkans, Middle East and Africa have joined forces proving that political borders do not exist in these efforts. All of them have united under the project “Urgent Actions to Strengthen the Balkan Population of the Egyptian Vulture and Secure Its Flyway”