The international “Jonian Races” event, an annual race which started off in the Corfu Greek island had as finish line the Saranda harbor. They were 17 sailing boats that took part in the race but only three of them were awarded with prizes, in a special ceremony held at the Castle of Lekuresi in Saranda.

The first prize was handed by the head of National Agency of Tourism and the second prize was handed by Deputy Mayor of Saranda Municipality, Jorgo Mitro. This was the first time this event included Albanian waters as a crossing place, since in all its previous events, the race ended in the Greek islands. 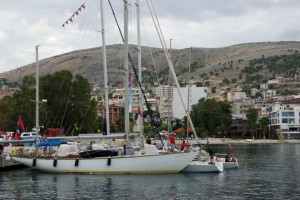 The official reception of this international race in Saranda city has attented by many high officials from the Ministry of Tourism and Urban Development, officials from the National Agency of Tourims, the Head of the Ionian Sailing Association, Arben Cipa, and journalists. The contestants were accompanied by students from the Corfu island, as followers of this traditional sport in this island.

The first edition of this competition of the inclusion of Saranda in the agenda of this international race, is a promising step towards the further promotion of Saranda coastline. This will also help for the transmission of this new sports culture in Albania.

Corfu greek island, Jonian Races, Saranda beach
Previous Post“Week of Adventure in Balkans 2014” to take place for the first time in AlbaniaNext PostBusiness Insider: Albania, one of the top 50 countries to visit during 2014-2020

An ancient legend about Saranda city

Saranda is situated in the southern of Albania and has a stunning coastline in front of the Ionian Sea. Located...

This is an article  written by Dalene Heck and the stunning photos are captured by Pete Heck while in their...

Israeli ambassador, Rodkin: “My mission, to increase the number of tourists in Saranda city”