Cipa expressed his readiness as the Mayor of Saranda to assist in extending the cooperation of Albania and Israeli in the tourism field, agriculture and technology, saying that Saranda wants to set a twinning partnership with one of Israeli cities.

In turn, Rodkin mentioned the help that Albanians gave to Jewish people during the World War Two, adding that the current collaboration will extend further. “We cannot forget the help of the Albanian nation,” declared Rodkin.

We have wide cooperation opportunities, added the ambassador, but a priority field is the agriculture and the development of greenhouses. Also, the tourism sector provides excellent opportunities for Israeli investors and travel agencies to increase the touristic tours to Albania and Saranda in particular. 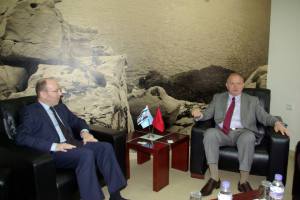 “This is one of my missions as an ambassador to Albania and I have already planned to spend my summer vacations in this city”, declared Rodkin during his visit to Saranda.

The Saranda Municipality Mayor gave to Rodkin the symbol of Saranda city ancient coin as a sign of friendship. “Saranda and its assets, starting from the synagogue to Butrint National Park, are a motto and a rich infrastructure for cooperation between Albania and Israel in this regard,” declared the Israeli ambassador to Albania, Boaz Rodkin.