Vienna Economic Forum
held a dedicated conference to Albania on May 12th, 2014, which took place in Vienna, Austria. The conference had in focus the promotion of opportunities that Albanian offers to foreign investors. Prime Minister of Albania, Edi Rama, the World Bank Country Director for Southeast Europe Ellen Goldstein and other high officials of important economic institutions held speeches regarding the challenges and benefits of investing in Albania.

Albanian PM Edi Rama, at first hailed the organizers for the conference and estimated it as an excellent opportunity to promote and present Albania to potential Austrian and foreign investors present in the event.  In his opinion, there are many problems Albania is facing at the moment, such as the struggle to stem the economic slowdown and the establishment of a new and efficient economic model.

“We are fully aware that Albania needs a radical change. We have taken the first steps and are encouraged by the response we’ve had – from Chancellor Merkel, when I recently met with her in Berlin – but also from the International Monetary Fund, the World Bank, governments and other institutions, who see the path we are walking and are willing to support us,” declared Rama. Since September, he added, we have taken a number of measures to stem the economic slowdown. We have signed an agreement with the International Monetary Fund for a new program that will provide us with the necessary liquidity to repay overdue debts inherited from the previous government, as well as to conduct a careful monitoring both of our public finances and of public expenditure policy. Currently, we are in talks with the World Bank for two Development Policy Loans and for reform in the energy sector. If we agree on taking the loan from WB, we expect and hope to eliminate in a short time any hidden debts inherited and will also start radical reforms in key sectors.

PM Rama estimated the role of the Austrian investments currently operating in Albania as well as the Austrian entrepreneurship. According to him, Albania must learn from the Austrian experience and policies in the economic field, particularly in the field of vocational training. Our aim, said Rama, is to enhance Albania-Austria economic cooperation, since foreign investments are vital for the Albanian economy.

“Very soon, with the support of the European Bank for Reconstruction and Development, the Government will establish the Investment Council, an entity that will provide an institutionalized and stable platform of cooperation with investors in our country and in the region,” announced Rama. At the end, Rama encouraged Austrian investors to play a bigger role in Albania by presenting them to the latest governmental incentives on the ease of taxes and bureaucratic procedures for foreign investors.

Vienna Economic Forum is a debate platform, aiming to popularize and promote investment opportunities in the region from the Adriatic to the Black Sea. 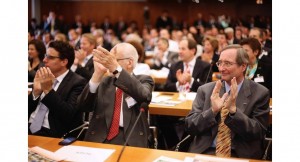