Total arrivals in January 2020 rose 20.9 percent to 693,956 compared to January 2019. The Albanian Insitute of Statistics (INSTAT) unveiled on Monday the data on the movement of citizens during the first month of the year.
The recent stats confirms a significant growth in the number of both Albanian and international citizens that travel out of the country. Hence, the number of citizens that traveled beyond the border of Albania rose 21.5 percent to 842.694.
Moreover, the data provide insight into the foreign citizens’ arrivals by country. Kosovo, North Macedonia, Greece, and England are the top five. Emigration and trade relations explain those numbers. 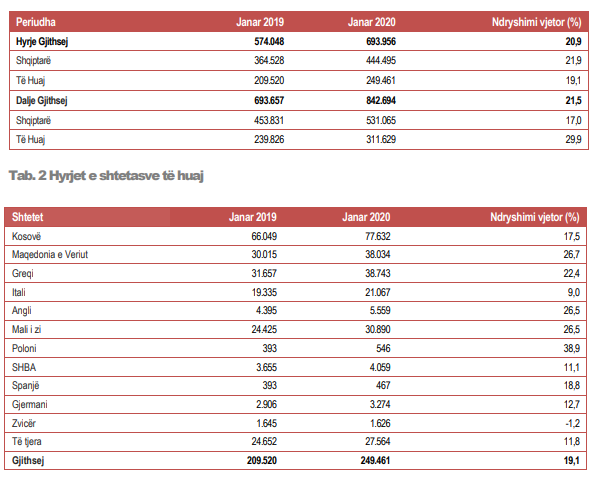 Moreover, the reasons for visiting Albania were various including personal, holidays, and business. Meanwhile, in terms of modes of transport, land prevails over air and sea. Yet, the number of arrivals by air increased by 12.4 percent compared to January 2019.

The increase in arrivals from Switzerland and Germany can be explained by the improved connection through direct air routes from Albania to Germany and Switzerland.
Low-cost carriers Albanwings, Wizz Air and Edelweiss operate weakly routes from Tirana to Dusseldorf, Dortmund, Memmingen, and Zurich. Meanwhile, British low-cost EasyJet inaugurated its direct route Tirana – Geneva on November 28th. Wizz Air started operating Vienna –Tirana – Vienna in December, while it announced five direct flights from Milan-Bergamo, Pisa, Bologna, Verona, and Venice-Treviso to Tirana on spring-summer 2020. Also, full-Service carrier Air Albania inaugurated its routes to Italy in 2019.
In the meantime, EasyJet will start a new service from Gatwick to Tirana will on May 1, with three flights per week. Meanwhile, Albawings will operate flights to Hamburg and Frankfurt starting the end of March.

On the other hand, Transavia will suspend Amsterdam-Tirana-Amsterdam service starting the month of April. Based on the airline’s website, the last flight from Tirana to Amsterdam will be on March 30th.