This article was originally published by balkanriver.net under the headline: New Vjosa study: Hardly any Energy, no Sand for the Beach.
Sediment study of the University of Natural Resources and Applied Life Sciences Vienna (BOKU) proves serious consequences of the planned power plants on the Vjosa.

For over a year, scientists from the University of Natural Resources and Applied Life Sciences Vienna (BOKU) have been studying the sediment transport of the Vjosa river for different high and low water phases. (find complete study below)

They measured how much gravel, sand, and fine sediment the Vjosa is transporting and calculated the annual sediment loads of the river. From these results, the researchers were able to predict the consequences on energy production, ecosystems, and the Adriatic coast, if the sediments would be held back behind the planned Kalivac and Pocem dam walls.

This is one of the most comprehensive studies of this kind on a river in the Mediterranean region. Furthermore, the study is very exciting since the Vjosa is the only river left in Europe with such natural dynamics. Comparably rivers, such as the Tagliamento in Italy, are already more affected than the Vjosa. Thus, the Vjosa is like a unique open-air laboratory.

The results are severe and at the same time unambiguous. The sediment load of the Vjosa is exceptionally high and exceeds the usual level – e.g. in Alpine rivers – significantly.

Every year, the Vjosa transports 5 million tons of sediment to the Adriatic Sea. That’s equivalent to the truckload of 250,000 big trucks each year. Exactly these quantities would be retained in the reservoir of the planned Kalivac and Pocem hydropower plants. 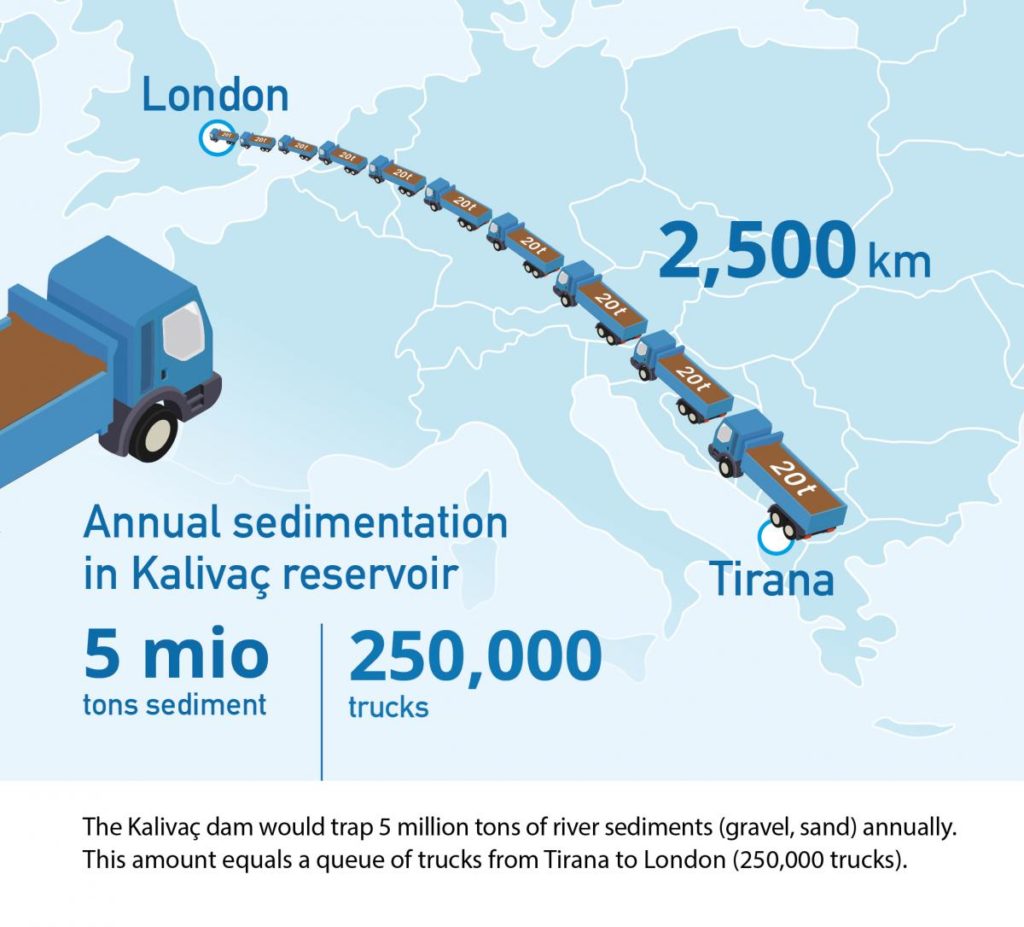 So, what would that mean for energy production, the Vjosa and the beaches on the Adriatic Sea?

Energy production decreases every year: Due to the deposition of sediments, the reservoirs would silt up by 2 percent annually. This, in turn, would reduce the potential for power generation of the hydropower plants by 2% per year. Over a period of 20 years, that would mean a 40 percent loss in potential energy production!

The Kalivac reservoir would be largely silted up within 45-65 years, the reservoir of Pocem within 30-40 years, the energy production correspondingly low. 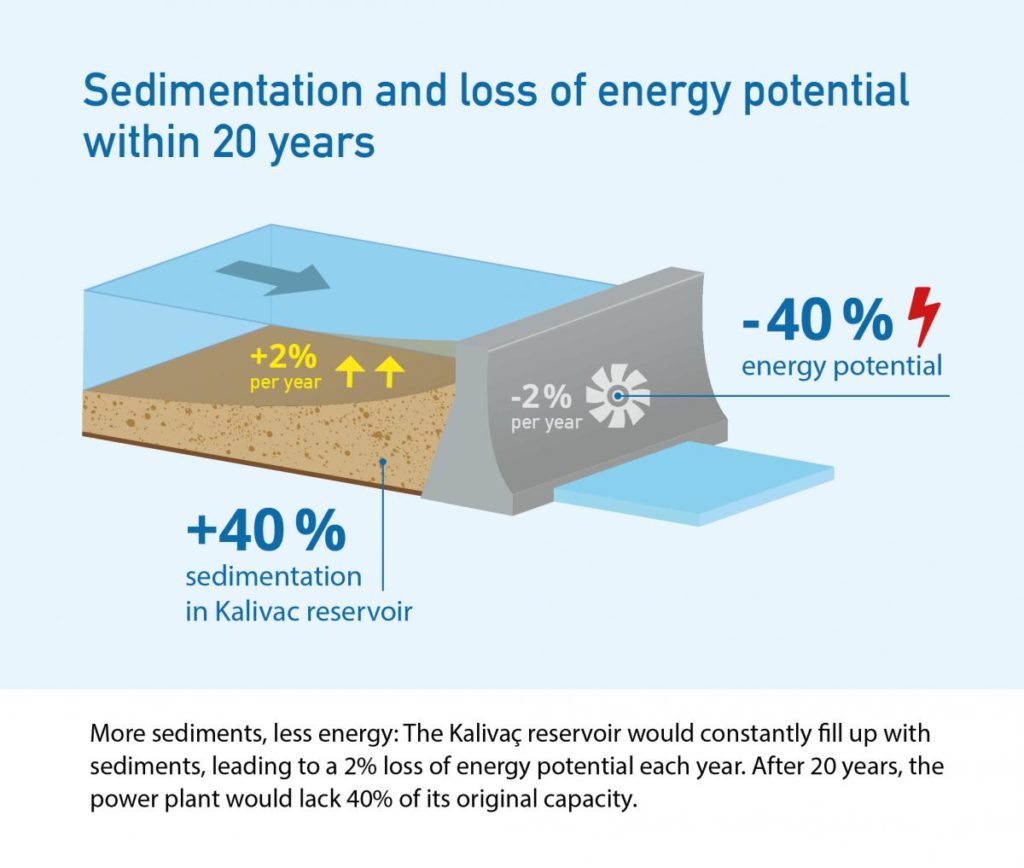 Increased costs: In the area of ​​the dam wall, extensive dredging of several 10,000 cubic meters per year would be required regularly in order to maintain the most important safety standards. According to the scientists, resulting costs would amount to several 100,000 Euros per year.
Lowering of groundwater levels: Below the hydropower plants, the Vjosa would cut drastically into its river bed due to the lack of sediments. As the river and groundwater are interconnected, the groundwater level would also drop considerably, with negative consequences for regional agriculture. Moreover, the floodplain below the dams would dry out. 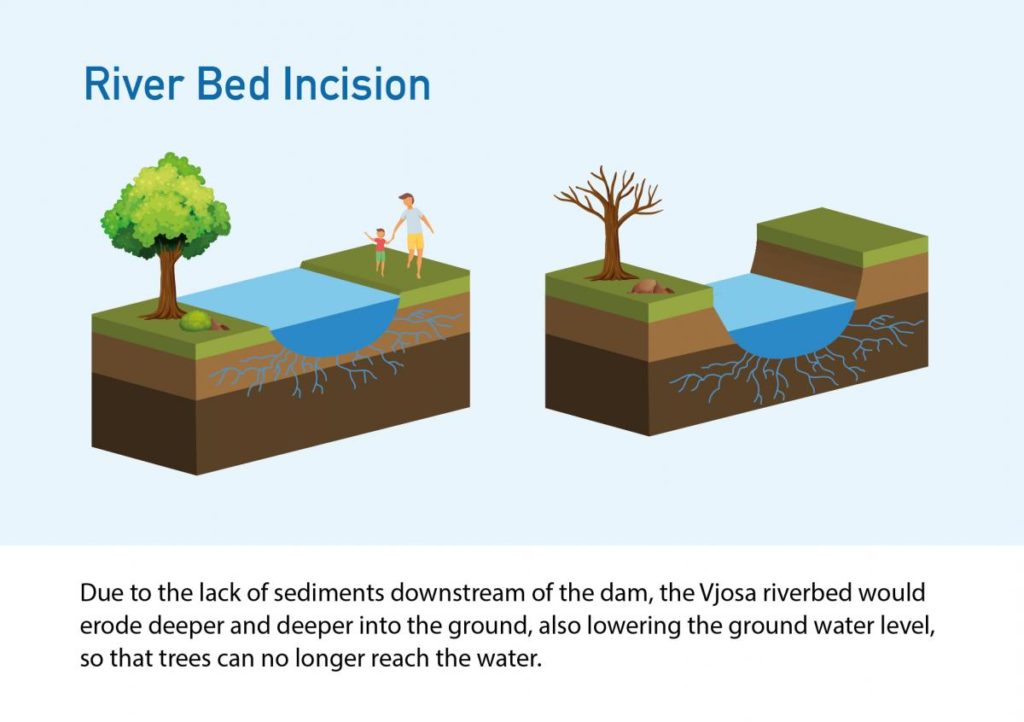 Beaches disappear: Another immediate consequence of the trapped sediment in the reservoirs would be a drastic erosion of the Adriatic beaches near Vjosa’s mouth: more and more beaches would disappear each year as the sand is flushed into the sea by the surf, without the Vjosa providing new sediments to replenish. 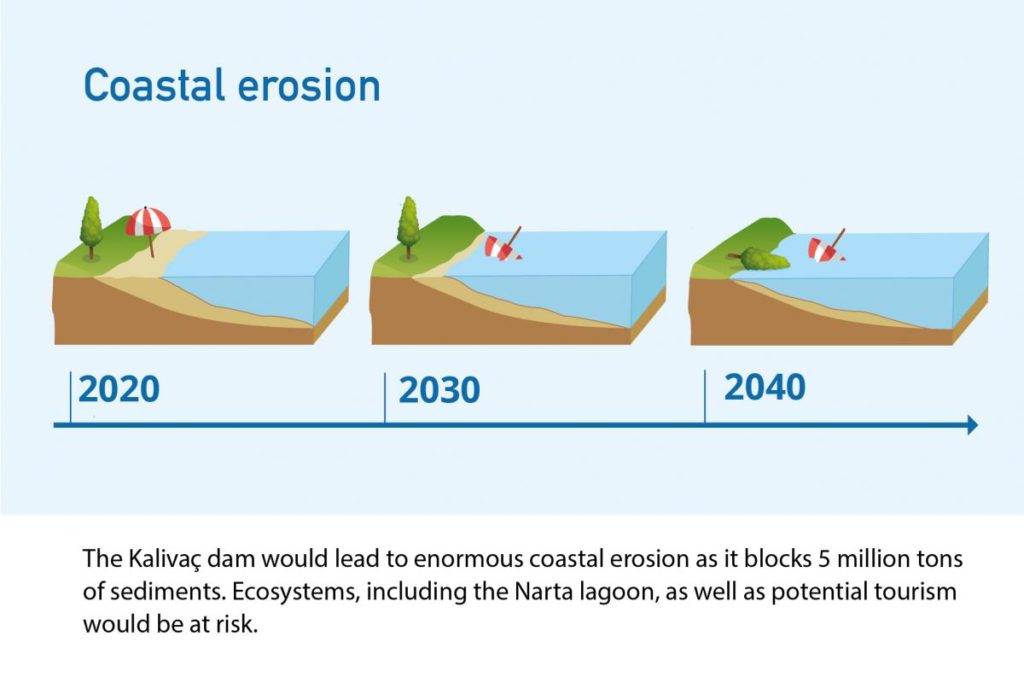 The scientists’ conclusions: the projected hydropower plans on the Vjosa would lead to a lose-lose-lose situation:

High economic costs due to the enormous sediment deposition in the reservoirs and the decreasing energy production,
Ecological degradation of a unique river system,
Long-term negative consequences for the beaches and thus for the tourism of the region.