Globally, the coronavirus pandemic is expected to cause a 40 percent decline in foreign direct investments (FDI), the United Nations announced on Tuesday.
According to the World Investment Report 2020 by UNCTAD, investment flows to transition economies where Albania makes part will decline by around 38 percent in 2020. Meanwhile, growth in FDI inflows in transition economies is expected to return in 2022. Moreover, the report highlights that a slowdown of activities has also been observed in export-oriented industries in South-East Europe.

Also, Albania is part of the South-East European economies that will also be affected by their broad exposure to the tourism and hospitality industries. Further on, the fact that a considerable part of FDI inflows is reinvested earnings, would result in a negative impact in FDI inflow. In Albania, about one/third or 35 percent of FDI consists of reinvested earnings.
In 2019 Albania ranked eighth in the SEE region with a $1.2 billion FDI inflow. The Russian federation was first in the list with $32 billion in FDI inflow followed by Serbia with $4.3 billion, Kazakhstan, and Ukraine with $3.1 billion each. FDI flows to Ukraine rose by 30 percent in 2019 attracted by the ICT, finance, mining, real estate, and electricity and gas sectors. 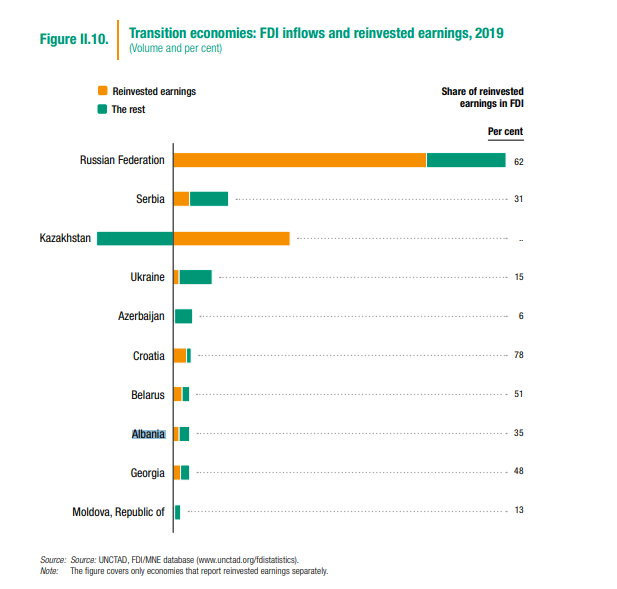