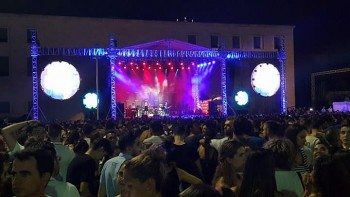 Well known singer with Kosova origin, Dua Lipa, sang on Wednesday night in an open concert in “Mother Teresa” Square in Tirana.  In an electrifying atmosphere, thousand of fans awaited the singer who has broken so many records with her album worldwide. The scene that was set up by the Municipality of Tirana, heated up by her performance. Dua made another concert in Pristina, her native city, with more than 20 thousand spectators. Earnings from this concert went to the charity foundation “Sunny Hill”.  Albania was included during the tour that she is doing simultaneously in several Balkan countries. Grown up listening her father’s song, Kosovo singer of rock music, Dukagjin Lipa,  she has always nurtured a special love  for Albania and Albanians, emphasizing her origin. “Be the One” and “Last Dance” have already become global hits of Dua Lipa, while “Hotter Than Hell” is currently in English top list.

featured
Previous PostSix Athletes to Represent Albania in Rio Olympics 2016Next PostFrench media: Traviatta makes the stars shine and cry at the same time, thanks to soprano Ermonela Jaho