Crown Agents British company has undertaken a voluntary initiative in financing the sowing of 700 pine seedlings in the national park of Divjake-Karavasta, along the shoreline.  The seedlings were planted by some of the Crown Agents’ employees and more than 50 volunteers in cooperation with the Directorate of the Forest Service of Lushnje and the Divjaka Municipality. 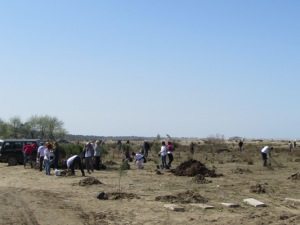 Present at this activity were also the General Director of the Crown Agents’ programme in Albania, David Smith and the Director of the Agency for Protected Areas Zamir Dedej.

In his opening speech, David Smith stressed that such natural parks must protect and maintain by all the actors. The pine seedlings were planted in the framework of the component of our company’s social responsibility, with the aim to reduce the impact that the carbon dioxide gas, emitted by the vehicles of joint Crown Agents – Albanian Customs’ work groups has in the environment, according to Smith. This initiative also is aimed at contributing in the forestation of this national park and the reduction of the erosion, caused by the sea. 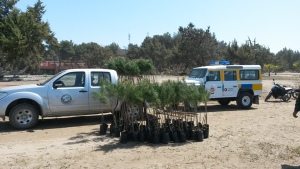 In turn, the head of the Agency for Protected Areas, Zamir Dedej, praised the Crown Agents company for financing and organizing this important activity and appealed to other companies and actors to play an active role in maintaining and protecting the Protected Touristic Areas in country.

As announced during the activity, Crown Agents plans to undertake other similar initiatives in the upcoming months, with the aim to contribute in different social causes and to raise awareness in the social responsibilities that companies have.