The portrait of renowned poet and at the same time author of the national anthem of Albania, Aleksander Stavre Drenova, known by his pen name Asdreni, will be featured on the newest Lek 10,000 banknotes, which will enter into circulation, on June 30th, the Bank of Albania (BoA) announced Tuesday.
The new Lek 10,000 is the highest value Albanian banknote. Some of the design elements of the new denomination were made public before by BoA, but the complete design was unveiled for the public only on Tuesday along with the improved Lek 1,000 denomination.
The new 10,000 note has the portrait of Asdreni in the obverse and its color is red. The dimension of the note is 160 mm x 72 mm. The reverse design includes the national flag and a verse of the national anthem. 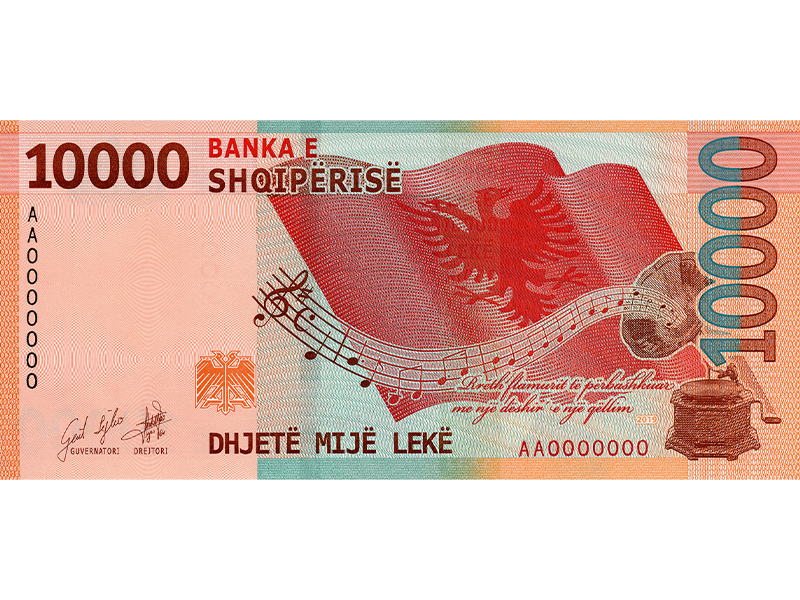 On its part, The Bank of Albania (BoA) highlights that the production of a new series of banknotes is a complex process due to technical issues that can result in changes to planned schedules for putting in circulation the new banknotes.
So far, BoA has withdrawn six banknotes. Currently, five denominations and seven coin denominations are in circulation. The Albanian coinage includes Lek 1, 5, 10, 20, 50, and Lek 100. The last is the only denomination of the Albanian Lek that features a woman, warrior Queen Teuta holding a spear and a shield.
All of the current banknotes and coins, besides that of Lek 2,000, were approved in 1995 and were released into circulation in 1996. Meanwhile, in 2008 the new banknote Lek 2,000 was added to the series of banknotes, and at the end of 2011, it finished the legal course for the Lek 100 banknote (which since then is a coin). Regarding the current banknotes, they will continue to be in circulation at the same time as the new ones, and they will still be used for payments.

The Bank confirms that the existing series of banknotes will be in circulation along with the new and BoA will announce the time when they are going to be withdrawn.