September 2014 marks the fourth edition of Balkan Film & Food Festival which takes place in Pogradec city (September 1st – 7th). According to a press release, the festival of this year will have a rich programme of commercial and animated films, short films and documentaries. The organizers have announced that these films are produced in different Balkan countries such as Albania, Kosovo, Bulgaria, Croatia, Turkey, Romania, Macedonia, Serbia and Greece.

The fourth edition of Balkan Film and Food Festival will  give producers the opportunity to compete with other producers’ films and documentaries, judged by an non-Balkan jury. The total amount of films to be shown is 70 which will meet in Pogradec with the aim to show a  panorama of differences and similarities of the Balkan neighboring countries. 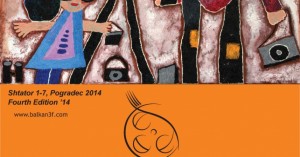 During the entire week of the festival, many young artists and producers will have the chance to present their works to a wide public of film lovers, experts and well known producers.

But the screening of films will be just a part of this festival, which will host many traditional foods and beverages, aimed to bring closer the Balkan cultures and peoples. The organizers of this festival have pointed out the importance of this festival as the perfect medium to know more yourself and your culture, by seeing the similarities of Balkan peoples not only in the art field but even in culinary. According to them, this will be a chance to exchange experiences and share values that characterizes Balkan peoples.

Balkan Film and Food Festival
Previous PostMen from Has kept the Albanian tradition of bread bakingNext Post“Jazz and Wine” festival, a medium for a cultural dialogue between artists