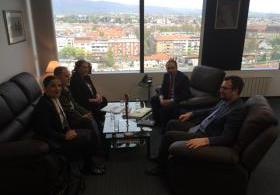 On Wednesday, the Albanian Ambassador to Zagreb held an official meeting with representatives of Geonatura Grupa Croatian company and Oikon, the Croatian Institute of Applied Ecology to discuss the possibilities of cooperation with Albanian companies.

According to the Ambassador Ilir Melo, the economic diplomacy is a priority for the Albanian Embassy in Croatia and that Croatian and Albanian companies have many cooperation opportunities.

At the meeting, the Croatian Institute of Applied Ecology announced it is preparing a project proposal on the framework of an international project in the field of forestry expertise and management. The officials present in the meeting discussed other cooperation possibilities and agreed in enhancing the economic cooperation in the future.

TIRANA, August 16 According to the United Nations (UN), foreign direct investment has become decisive for the performance of the Albanian...

TIRANA, December 13 Foreign direct investments in Albania reached Euro 276 million during the third quarter of 2016. According to...

TIRANA, October 26 Albania and Croatia are taking into consideration the launch of a ferry route Durres-Rijeka and a direct...