The countries of the Balkans more and more are convinced that cooperation between them is the only way for attracting new investments and tourists, mostly from Asia and Eastern Europe. This was highlighted during the presentation of tourist packages by Serbian tour operators in Tirana.
Currently, Albania and Serbia have low levels trade exchange and tourism. According to Deputy Foreign Minister Selim Belortaja said that this is related to factors such as the lack of infrastructure and history. However, both sides stressed out the need for joint efforts for drafting tourist packages that will attract more tourists in the region. 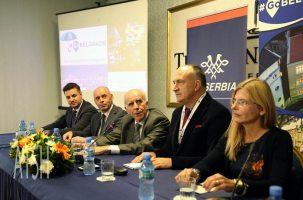 On his part, the chair of the National Tourism Agency, Ardit Collaku said that Albania, Serbia, Kosovo, Croatia, and Macedonia agreed on the establishment of a working group that will promote the region to the Asian and Russian-speaking countries. According to him, tourists from these countries prefer to visit more than one destination.
Further on, the chair of the Serbian Tourism Association, Biljana Radulovic said that the interest of Serbian tourists for visiting Albania, especially Saranda, increased during the recent years.
According to her, Albania has enough potential to attract visitors.
Currently, Albania and Serbia are connected through a direct airline, which is an important factor for boosting tourism development between both countries.