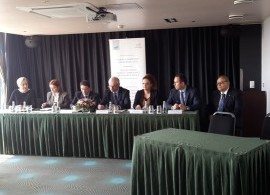 The General Secretary of the World Tourism Organization, Tabel Rifai, has considered Albania as a rising star in the international tourism field during the meeting of the Albanian vice Minister of Economic Development and Tourism with the Lithuanian Minister of Economy. The two officials signed a joint agreement for enhancing the cooperation between the two countries in the tourism sector.

“For cooperation in the tourism field” agreement was signed by the Albanian vice Minister of Economic Development, Adela Karapici, and the Lithuanian Minister of Economy, Evaldas Gustas. Through this agreement, the two countries will increase the cooperation on behalf of the tourism sector in the institutional level. The two countries’ Ministries will exchange information and share experiences in this field with the aim to increase the number of tourists in respective countries.

The 5 year term agreement entered in force in the moment it was signed by the two countries. Lithuania is known for its support in Albania’s EU integration process.