This is not an original article of invest-in-albania.org. The article was written by Mihaela Lica Butler and published at Agrophilia.com.

Not far from Berat rises the majestic Tomori, home to the Tomori National Park (Parku Kombëtar i Tomorrit), which spreads over more than 4000 ha, and is a local favorite for camping, trekking, hiking and even pilgrimages. The highest point of the park is at 2415.7 m above the sea.

The Tomori National Park is a green area, with beech forests, and large alpine pastures all around. You’ll find many herbs, medicinal and aromatic, especially in the south, as well as some endangered species such as Astragatus autranci, Aubrieta Intermedia, Cupris baldacii and Nepeta spursei. In fact, the area boasts more than 20 plant species considered endangered or extremely rare.

If you adventure here, don’t forget that this is a wild park, with permanent tenants such as brown bears, wolves and wild boars. But there are also various reptile species you should be aware of, including poisonous snakes: vipers. Birds are represented by several types of eagles, woodpeckers, wild pigeons, wild turkeys, and many others.

Tomori National Park (Parku Kombëtar i Tomorrit) is crossed by many trails and footpaths with a dramatic change of pace. Nevertheless, no matter your level of experience, don’t adventure without a guide. 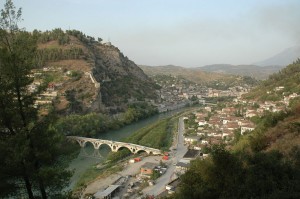 Berat Castle is a famous fortress, built by the Illyrians. The fortress ruins overlook the town of Berat, designed in 2008 a UNESCO World Heritage Site as a rare example of a well-preserved Ottoman town.

The Berat Castle has a long history, traced back to 200 B.C. After being destroyed by the Romans, the walls were strengthened again in the fifth century under Byzantine Emperor Theodosius II. The fortress was then rebuilt during the 6th century by Emperor Justinian I and again in the 13th century under the Despot of Epirus, Michael Angelus Comnenus. The current appearance of the fortress dates from the 13th century.

Kisha e Shën Mëhillit (Church of St. Michael) was built on the south side of the castle of Berat, straight in the rock. The 13th-14th century church is a protected cultural monument since 1948. Unfortunately, the interior of the church is degraded, retaining only partial traces of its murals, as the surface is generally covered with lime. But from the outside, there are many notable architectural elements, including the care for balance and perfection of shapes. Last, but not least, it is one of the most scenic churches of the Berat Castle, and those who adventure to climb up to see it, will be rewarded with stunning views of Berat itself. 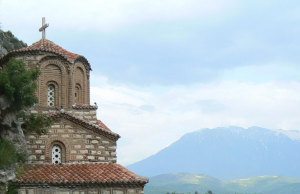 Surrounded by the walls of the Berat citadel, the Church of St. Mary of Blachernae (Kisha e Shën Mëri Vllahernës) is famous for its biblical murals by Nikolla Onufri, son of the famous Onufri, known for his Byzantine style icons. The paintings date from 1578. This is the most famous of the churches inside the fortress.

The Onufri National Museum (Muzeu Kombëtar Ikonografik Onufri) is a small iconography exhibition inside the Church of St. Mary of Blachernae on the grounds of the Berat citadel. The museum was named to honor Onufri, an Albanian painting Headmaster of XVI Century.

The museum features on display 173 objects chosen from a found of 1500 objects belonging to the found of Albanian Churches and Monasteries as well as to Berat. From these objects, 106 are icons by Albanian icon painters of the XVI – XX centuries: Onufri, Onufri’s son, Nicola, David Selenica, Kostandin Shpataraku and Cetirs (Gjergj, Nicola, Johan, Naum, Gjergj junior), as well as some anonymous painters. The other 67 items of the collection are liturgical objects. 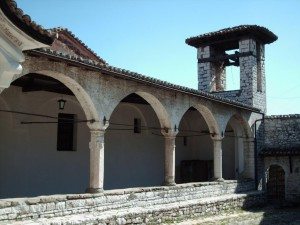 Kisha Shën Triadhës (St. Trinity Church) or, as listed on Google Maps, Kisha Shën Triadha, is a very small church in Berat, not far from Akropoli in Kala district. The church stands inside the fortified walls of the Berat Castle, as one of the oldest churches on site. The current church was built in the fourteenth century, on the site of an older church, dating from the seventh century. The Orthodox church became a Cultural Monument of Albania in 1948.

With its Byzantin-inspired architecture, Kisha Shën Triadhës (St. Trinity Church) is a stunning view itself, however, the church is popular mainly for its strategic location, that allows visitors beautiful panoramic views of the surrounding attractions.

Kisha e Shën Mitrit (St. Demetrius’ Church) doesn’t look like much, but it is interesting, nevertheless. What stands today here was rebuilt on the remains of an old temple in the XVI-XVII centuries; and the murals were painted in 1607. A porch was built later around the church, on three sides. Inside, the church only has a small naos and altar. The church was entirely built of limestone and clay.

The King Mosque (Xhamia Mbret) is part of the Islamic Center complex of Berat. It was built by Sultan Bajaziti II in the fifteenth century, and it became Cultural Monument in 1948. The mosque features an impressive ceiling mural in the prayer hall, with rosettes inscribed with suras from the Qur’an. A fresco below the ceiling contains 99 beautiful names of God.

There is also a prayer porch built in the late XVIIIth century by Usta Dush Barka. The upper part of the minaret was rebuilt in recent years. From outside the mosque is totally plastered and the stucco is painted to imitate its masonry.

The original Kisha e Shën Thomait (Church of St. Thomas) was built in the 18th century, but was destroyed during Albania’s communist regime. It was rebuilt in the late 1990s with donations by the local community. It can be found in the Gorica district of Berat, not far from Berat Backpackers.

A cultural monument, the Bridge of Gorica (Ura e Goricës) is one of the oldest of its kind in Albania. The bridge was built in XVIII century. It was originally made of wood, and in 1780, during the ruling of Ahmet Kurt Pasha, it was rebuilt with stones. The Bridge of Gorica had a complete reconstruction during the years 1920-1930.

Ura e Goricës has a length of 129.3 meters and width of 5.3 meters. It consists of seven arches connecting the neighborhood Gorica with other parts of Berat.

The Gorica Castle Remains (Rrënojat e Kalasë së Gorices), or Fortification of Gorica, can be found in the Velabisht municipality of Berat, overlooking the Osumi river, opposite the Castle of Berat. The ruins are dated 4-3 centuries BC, however, archaeological finds on site revealed Late Bronze and Early Iron Age fortifications, suggesting that this habitat may be older than the ruins of the Gorica Castle. This castle hasn’t been occupied since the Roman occupation, after the 2nd century BC.

The Berat Ethnographic Museum (Muzeu Kombëtar Etnografik në Berat) was opened in 1979, inside a two storey 18th century Berat house. On the first floor, the museum features a medieval alley that documents what life in that time used to be like. The alley exhibits traditional shops, and ancient pavilion, and objects used for olive processing, as well as other relevant items.

The second floor features archives, as well as many original objects attesting the customs and lifestyle of the Albanian village. There are over 1200 objects in the museum, and the gardens outside, which also feature interesting ceramic vessels, and olive oil press.

Previous Post9 places in Albania that look like they have been taken out of fairy talesNext Post(The Telegraph) – Epic Walks: the Accursed Mountains, Albania

Blockchain Regulations to Pave the Way for DLT Licensing

BoA to End Confusion Over New and Old Lek

TIRANA, November 17 ‘Just Lek. Neither old Nor New’ is a financial education campaign that hopes to permanently end the...