Albania’s good exports shrank 44.4 percent to Lek 15 billion last month compared to the same period of 2019, official data from the Institute of Statistics showed on Monday. Imports in April reached Lek 36 billion, marking a decrease of 36.7 percent compared to April 2019. Trade deteriorated as the country went in lockdown to prevent the spread of the COVID-19. Albania’s trade deficit in April narrowed by 29.9 percent to Lek 21 billion compared to April 2019.

Moreover, data for the first four months of the year show that exports decreased by 18.5 percent compared to the same period of 2019.
Major commodity groups that recorded a decline in exports during January – April were textile and footwear (-20.1 percent), construction materials and metals (-10.5 percent), mineral, fuels, and energy (-8.4 percent), etc.
Despite the global slowdown due to the pandemic Italy remained the major trade partner during Jan – Apr followed by Germany, Greece, and Turkey. 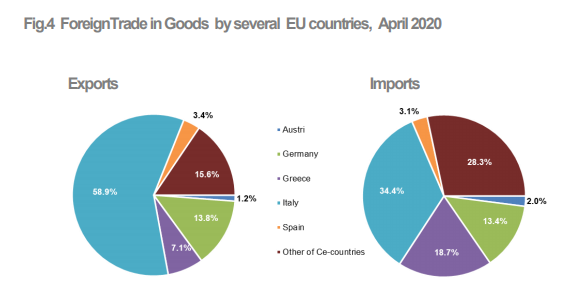