This is not an original article of invest-in-albania.org. The article is written by Mihaela Lica Butler and published at Argophilia.com. To read the original article, please click here.

Tirana is not a well known destination, despite Albania’s efforts to appeal to more foreign visitors. The capital of the country is still unspoiled by tourists, and has a unique charm. The very few who manage to visit Tirana are amazed by its landmarks, but most importantly by the outrageously cheap prices practiced by most hotels and restaurants. Not only a heaven for backpackers, Tirana has the potential to become a destination for romantic couples as well. 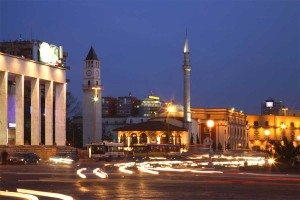 Tirana is a place for travelers who enjoy discovering new places, and the Albanians are some of the friendliest people in the part of the world. If you visit the country, you will enjoy their warm hospitality, and you will be surprised by how little they expect in return. For first time visitors to the city, these are some of the must-see attractions:

The National Gallery of Figurative Arts (Galeria Kombëtare e Arteve Figurative) officially opened to the public in Tirana on 11 January 1954, but it stands on its current location on the Boulevard Martyrs of the Nation (Deshmorët e Kombit) only since 1974. The gallery is the most important national institution of exhibiting, conserving, studying, restoring, publishing, documenting and archiving the works of art in Albania. It presently boasts over 4100 art works by Albanian and foreign artists, spanning a time period that starts from the thirteenth century and continues until today.

The Sheshi Skënderbej (Skanderbeg Square), pictured above, is the heart of Tirana, a lively meeting place, surrounded by some of the most important tourist attractions of the city. This is where you will find the National History Museum of Albania, a statue of Albanian hero Skanderbeg, the National Theater, the Gallery of Figurative Arts, the Palace of Congresses, and other important landmarks. Here you will also see Kulla e Sahatit, the city symbol of Tirana.

As one of the oldest buildings in the city, the Clock Tower represents an important touristic attraction. Kulla e Sahatit was built in 1822 by Haxhi Et`hem Bey, as a bell tower. The original Venetian bell used to ring the time every hour. In 1928 the tower was extended to 35 meters, with a German hand-made clock.

Unfortunately, the German clock was destroyed by bombardments during World War II. What you see today is a Chinese clock, that replaced a Roman numeral clock brought from a church in Shkoder in 1946. Until 1970 Kulla e Sahatit was the tallest building in the capital.

Initially this was a bell tower – the clock being added in 1928. there was a bell to bring out the Venice which fell every hour.Dome located at the top gives it an architectural style San Marco.

In the immediate vicinity of the Kulla e Sahatit (Clock Tower) you will find a Clocks’ Museum featuring clock towers from around Albania. The Muzeu I Orëve (Clocks’ Museum) is a new museum opened in the former Dyqanin e Sahatçiut shop. The museum documents the history of tower clocks in Albania through models, documents, prints, graphics and other historic items. The main focus is Kulla e Sahatit, Tirana’s city symbol. Access in the Clock Tower is free.

Opened in March 2007, the Mezuraj Museum is an archaeology and figurative art museum in Tirana. 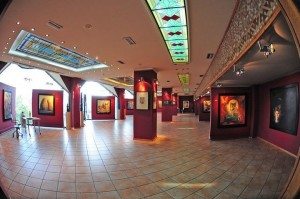 The archaeology collection can be compared with those of the National Historical Museum or Archaeological Museum of Tirana in terms of quality and historic significance. On display, you’ll find numerous ceramic vases dating from the VI-IV-th century B.C.; sea amphoras belonging to the IV-th century BC till II-nd century; Illyrian ceramics; silver and bronze objects belonging to the Arbëresh culture; and various objects dating from the Middle Ages.

The art collection in the Mezuraj Museum includes sculpture, painting, and drawing from local and international artists. The artistic fund of the museum comprises over 4000 exhibits – many on permanent display. The museum is located on Kavaja Street (near the Chamber of Commerce).

Baitul Avval Mosque, also spelled Baitul Awwal Mosque, is one of the largest mosques in Tirana, and in all Albania for that matter. It belongs to the Ahmadiyya Muslim Community (Ahmadiyya Muslim Jama’at, Jama’at Ahmadiyya), which is established in 195 countries all over the world. The community has been established in Albania since 1934. Besides the mosque, they also have the Darul Falah Mission House in Tirana. 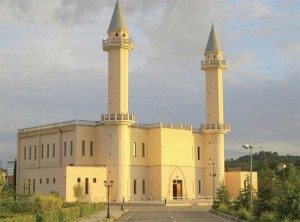 Lumi i Lanës (Lana River) is a stream flowing through Tirana, unfortunately polluted and unappealing. But there are some chic neighborhoods on its banks, some recently rehabilitated, with new buildings, and green parks. Lanë flows into the Tiranë River near Bërxullë. 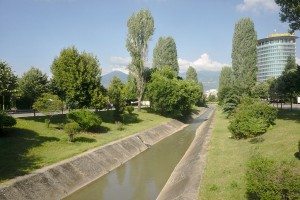 Kisha e Zojës Ndihmëtare (Church of Our Lady of Help)

Kisha e Zojës Ndihmëtare (Church of Our Lady of Help) has been inaugurated in 2008 – a modern construction, designated as a catholic church in the Laprakë neighborhood of Tirana. The church was consecrated Saturday October 25, 2008, by Archbishop of Tirana-Durres Rrok Mirdita, during a solemn Mass attended by the local community, as well as bishops and priests from all Albanian territories. You can see a superb image of the church on Panoramio.

Sheshi Nënë Tereza (Mother Teresa Square) is one of the most popular landmarks of Tirana. The site of the University of Tirana, the second largest square in Tirana takes its name from the most famous ethnic Albanian woman, Mother Teresa, born Agnes Gonxha Bojaxhiu. Following her death she was beatified by Pope John Paul II and given the title Blessed Teresa of Calcutta.

There is a small monument to her honor in the square, a modest statue at the left side. On the east side of the Sheshi Nënë Tereza (Mother Teresa Square) you can find the the Archaeological Museum, and the Qemal Stafa Stadium behind the square. South of the square you can find Tirana’s Grand Park (Parku i Madh) the site of the artificial Lake of Tirana, a weekend favorite for many families.

To the East of the East of Tirana’s city center, Lake Farka (Liqeni i Farkes) is a local favorite for waterborne fun in Summer. Picnicking, jet and water skiing, swimming, boating, all the usual wet sports suspects. Larger then its cousin the artificial lake at Parku i Liqenit, this countryside jewel is perfect for getting away from it all for an afternoon.

Despite the natural beauty of the lake, visitors should be aware the area is not yet well developed in most areas. Services are few, and there are no lifeguards. Newcomers should seek out assistance, or take care when swimming or skiing. One of the beautiful things about Albania and much of the rest of Eastern Europe is that most places are really unspoiled, untouched, like Lake Farka.

Parku Rinia is the main park of Tirana. The park has been re-landscaped in 2001, to restore it to its former beauty, as many kiosks were built here in the 90s, destroying the green space. The park is one of the sites of the Summer Festival, a pagan celebration that takes place every March 14, to mark the end of the winter, the rebirth of nature and a rejuvenation of spirit amongst the Albanians. During the festival, the Rinia Park is lively with music and laughter, as the traditional circus show presents some of the most skilled performers, acrobats and magicians in Albania.

One of the main attractions of the park is the Taivani complex, with restaurants, café, underground bowling and a beautiful artesian fountain at the main entrance.

Rinia Park (Parku Rinia) is another of Tirana’s lush green spaces. The park was built in the 1950′s and covers an area of almost 30 hectares. Best know for the Summer Festival held there every year, Parku Rinia a complete rebuild in 2000 saw a huge resurgence in the spot’s popularity. The water feature here is quite extraordinary.

Beside all the usual city park attractions, Rinia Park also has a superb restaurants, terraces, cafes, and the aforementioned water park feature. Tiranians flock to the park in the evenings, taking pleasure from the many diversions, as well as the relative peace and quiet.

Prezë Castle is one of Tirana’s most interesting and picturesque relics from antiquity. Situated overlooking a town of the same name, the 15th century castle was once owned by the Topias, a famous feudal family in Albania’s history. The four towers of the castle overlook the beautiful plain of Tirana, making it a popular touristic attraction and day excursion for the locals.

The castle was built by a tribe of the legendary Illyrians who vied with Rome for centuries. The Parthini, as this particular tribe were known, were likely a tribe under the domain of Illyrian Prince Pleuratus, who was local to Rome while many Illyrian tribes were aligned with Greece. The Allyrians were renowned throughout the ancient world for their skill at combat.

Prezë is located just 22 km East and North of the Tirana city center. The visitor will find many quaint restaurants and fantastic countryside attractions of interest in the town and along the way.

Mount Dajt, just to the east of Tirana, is the highest peak in the county. At just over 1,613 m (5,292 ft), the mountain is a popular retreat in Winter for the locals, who seldom get a chance to see snow. Dajti Mountain is now actually a 3,300 hectare national park maintained by the Tirana Forest Service.

The mountain area is noted for its forests. Populations of oak, beech forests, and many types of conifers make the park a veritable paradise compared to the smog of the nearby city. Access to the area is good all seasons, but the lone asphalt road does make the journey a bit of an adventure. For camping, hiking, or just getting in touch with nature, Mount Dajt is just the spot in Tirana. 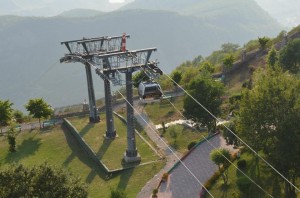 You will enjoy it even more if you take a ride in the Dajti Ekspres, a new gondola lift, unique in Albania.

The building was designed by a team of architects under the direction of Enver Hoxha’s daughter, Pranvera Hoxha and Klement Kolanecit. Today, the Piramida hosts various international fairs, and is also the home of the Top Channel commercial television station of Tirana.

The building is one of the most popular architectural sights of the city, and can be found on numerous architecture tours recommendations. The building is popular as it can be climbed on foot, similar to the pyramids that inspired its design. In the vicinity you can find Tirana’s iconic Twin Towers, and other important landmarks.

The Botanic Garden of Tirana (Kopshti Botanik) was begun in 1964, and now comprises some 15 hectares of lush green space right alongside Parku i liqenit. Completed in 1971, the garden is home to phytogeographical and systematic collections of extraordinary scientific and cultural value. The garden is part of the University of Tirana, and serves schools all over Albania.

Educational outreach, touristic attraction, and local green paradise, the Botanical Garden of Tirana is one of the city’s most prized green spots. Of the 2,000 species of Albanian and exotic gene grow here. You don’t want to miss the opportunity to take in this marvelous botanical treasure.

TIRANA, August 9 The number of Israeli tourists that came to Albania during this summer season was tripled, in comparison...

TIRANA, July 15 The tourism on the Italian coast is seeing a big competition on the other side of the...