Korça is a wonderful city which carries a unique and diverse culture, old traditions and remarkable values of civilization. The high stage of development at the time of the Ottoman Empire rule and the renowned personalities for which the city if proud of, have made this city an inevitable touristic destination. Below we have listed top ten cultural attractions tourists must not miss if they find time to visit Korça. 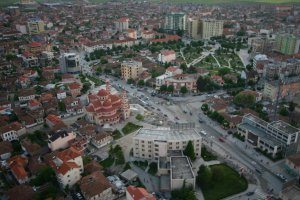 The National Museum of Education

This museum represents the first Albanian school, opened on March 7th, 1887, mostly known as “Mësonjëtorja” for two main reasons. Firstly, it is established in the old and historical building of Mësonjëtorja and secondly, in its stents you can see the photocopy of the first Albania “Abetare”, the elementary book for learning Albanian alphabet and basis of the language.

“Abetare” has been written by Naum Veqilharxhi and his photo portrait, along with other patriots and Albanian contributors are showcased in this museum. The Museum of Education showcases the original tracks of the first attempts of Albanian patriots in opening schools in Albanian language, in a continuous fight to win dependency from the Ottoman Empire.

The mosque carries historical, cultural, religious and architectural values. It is the first dome mosque constructed with building blocks in Albania. In the interior it is painted in white color and its walls are decorated with paintings of Mecca and Medina sacred places.

The Museum-House of the painter Vangjush Mio

The Museum- House of the impressionist painter Vangjush Mio was proclaimed a cultural monument and it contains approximately 40 paintings realized in oil, landscapes, quiet nature, and many other paintings which are known for their highly uncommon style.

Vangjush Mio is distinguished as an Albanian landscape painter and he is the first Albanian painter that opened the first exhibition in Tirana in 1920, whereas in 1942 he opened his own exhibition in Bari. 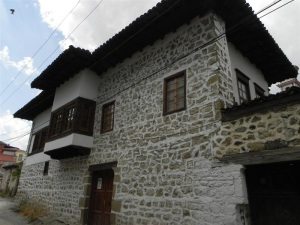 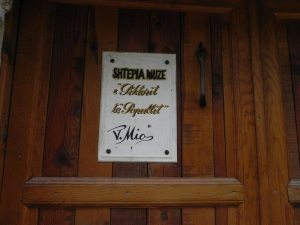 This boulevard is considered a culture monument for its characteristic houses with railings, the trees and flowers which flourish during the spring and summer seasons and make the boulevard a unique place to take a walk. The citizens of Korça have since called it the “boulevard of promenades” because is the perfect place for walking at evenings. The boulevard is the place where you can have a coffee at the best bars in town. 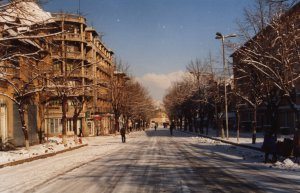 “The Valley of tears”

It is known as the place where the emigrants of the XIX century were seen off. Korça is the only city that has such a place which is protected, dedicated to the root of emigration, often known as the point “where there the city ended” since among tears and candles wives waited for their long-gone husbands or for good news from them. During the XIX century this lawn turned into emigrants’ temple. In the period when Korça enumerated not more than 12 thousand inhabitants, the “The Valley of Tears” was a crossroad between Albania and the other side of the border. 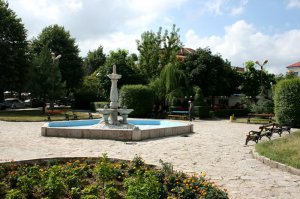 A century ago this valley was situated on the way to Manastir and Thessaloniki, from where Albanians started their migration to Turkey, Romania, Bulgaria and America. The remittances brought by emigrants helped families’ economies and as a consequence affected in city’s culture by bringing new foreign cultural elements which Korca city has inherited from the past.

“The Valley of Tears” which carries the same name even nowadays, once was a valley where people used to cry for their loved ones and today represents a recreational area for the citizens.

The old bazaar of the city constitutes a valued object according to the historical, cultural and artistic viewpoint. It is characterized by one and two floor buildings, narrow paths and a unique construction style which attracts the visitors’ attention.

In the past centuries the bazaar was the place of trade and a crossroad of merchants coming from the east or the west of the continent.

It was known for the inns located one after the other and it is of importance to distinguish the Inn of Elbasan and the Inn of Manastir which at their flourishing served as dormitories during the end of the XIX century and the beginning of the XX century. In the city planning structure the bazaar constituted a separated gathering.

Both sides of the Bazaar which were separated by the river were connected to each other by wooden bridges, while the main road coming from the city passed the river on a stone vault bridge, above which stood shops. The bazaar was buried three times but it was constructed again and again. Now the bazaar continues functioning as before and it carries historical and monumental values.

The cathedral is built in 1994 and it belongs to the orthodox denomination. Based on its dimensions it is denoted as the most important in Korça and the greatest in Albania. “Christ Revival” Cathedral has three floors and it occupies an area of 1500 square meters. 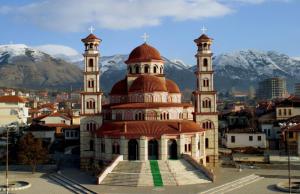 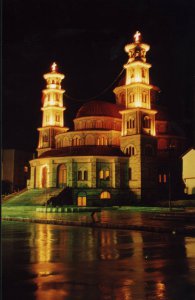 This Park is the area of promenades and the “first kisses” for all those living in Korça. Nowadays the park is an open gallery of the contemporary art of stone sculptures. Korça is the first city in Albania that has welcomed every year sculptors from all over the world who realize and showcase their compositions, adding this way a prominent value to the city, a value which is related to the early tradition of stonework in this city. In this park one could enjoy the open gallery of the modern art sculptures in stone and take a walk surrounded by culture, sculpture and great artists’ works. 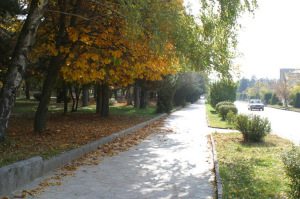 The Oriental Art Museum “Bratko” was opened in July 2003, accomplishing this way the dream of Dhimiter Borja (1903-1990), artist, photograph and also a collector of Asian art and antiques. Borja was born in Korça, despite of the fact that he travelled a lot around the world and then was situated in America throughout the great part of his life. 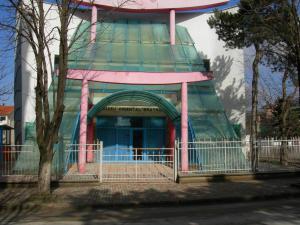 In this museum there are exposed 432 objects such as piano, Chinese Altars, Japanese women clothing, Chinese skirts and belts, Indonesian swords, European medals, Japanese paintings, different photographs, which Borja has realized while serving in Balkan under UNO’s Mission. The photo images are really uncommon. They show the social and cultural history immediately after the war as well as the important role played by the general MacArthur in the economical and institutional reconstruction of Japan. The archivist Zobel states about Boria: “He was a genius. He came to this place with the hands on the pocket and succeeded in becoming famous. This is enough to show his strong character.”

The old neighborhoods of Korca

The old neighborhoods of Korça are situated on the eastern part of the city, behind the church “Christ Revival”, at the entrance of “Republic” boulevard and that of “Shen Gjergji”. Generally the old houses are well – kept and they deserve a visit. In the first decades of the XX century the enrichment of the bourgeoisie displayed the contrast between the old area of the city, which settled in Penço and Manço neighborhoods (the areas over the monument of the National Combatant) became really obvious.  Whereas in the old area of the city there was noticed the typical city planning of medieval Balkan centers with their narrow twisting paths and with low buildings, not organized; in the new area neighborhoods the paths were straight and they formed building parcels. 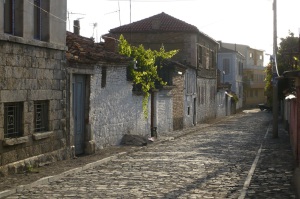